With the curtains coming down on India Inc's Q2FY23 earnings season, analysts were busy in November making rating revisions and upgrading their outlook for stocks that managed to beat the consensus. Britannia saw the maximum upgrades after a solid earnings beat while Divi's Labs was shunned by analysts after its Q2 net profit slumped 18 percent year-on-year.

While all fast-moving consumer goods (FMCG) companies reported a margin decline in the September quarter due to the high cost of inventory, Britannia's EBITDA margins expanded to 16.3 percent from 15.5 percent in the same quarter last fiscal. In its earnings press release, the company said it had added 28,000 rural preferred dealers, leading to consistent market share gains, now at a 15-year high.

Also Read: How Britannia managed to trump analysts and its FMCG peers

As commodity prices have now eased and the high cost inventory has been passed on, analysts believe FMCG margins are set to expand with volumes reviving on a bounceback in rural demand. Riding on this, HUL, Tata Consumer Products and ITC also saw slight upgrades in their ratings over the last month. Meanwhile, Divi's Labs and Cipla were among the top three stocks that witnessed the maximum downgrades over the last month. This was largely on the back of the pharma sector posting muted Q2FY23 numbers given the high base in the year-ago quarter, which was boosted by sales of COVID-19 linked treatment drugs.

Auto companies Tata Motors and Eicher Motors were next in line in the list of stocks with maximum downgrades over the past month. In Q2FY23, Tata Motors reported a higher-than-expected loss of Rs 944.61 crore and Jaguar Land Rover's wholesale volume grew only 4 percent, which was lower than what the company had planned.

As losses continue, brokerages fear that the Tata group company's zero net debt target could get pushed beyond FY25 from FY24. Adding to investors' woes, JLR has announced a production cut in its UK factories in 2023 due to semiconductor issues, which indicates that chip shortage problems continue to haunt the carmarker. 'Buy' calls on the stock have come down to 23 from 26 in October.

Eicher Motors, too, saw its 'Buy' calls decrease from 35 to 32 over the last month. While the company posted 76 percent year-on-year growth in Q2, analysts are wary of increasing competition in the premium 250 cc and above category (like the launch of TVS Ronin). Nomura analysts expect Royal Enfield's market share to reduce from 86 percent to 74 percent by FY30 as competition comes in.

On the flipside, Eicher Motors also features in the list of maximum upgrades over the year ended November. The upgrades were largely on the back of expensive valuations correcting in March 2022, when the stock fell from the Rs 2,800-level to Rs 2,110. The company's commercial vehicle business also remains in favour with analysts. Sharekhan expects the segment's contribution to the company's PBT to quadruple — from 3 percent last fiscal to 12 percent in the next.

Adani Enterprises , the newest entrant in the Nifty 50, now has one buy call compared to nil buy calls in November last year. Despite a trailing P/E valuation of 360x, analysts at Ventura Securities have a 'Buy' rating on the stock with a target price of Rs 4,310 per share.

The brokerage firm believes that AEL will be exploring green energy opportunities across the globe and any announcement towards the same can lead to further rerating of the stock, beyond their estimates. 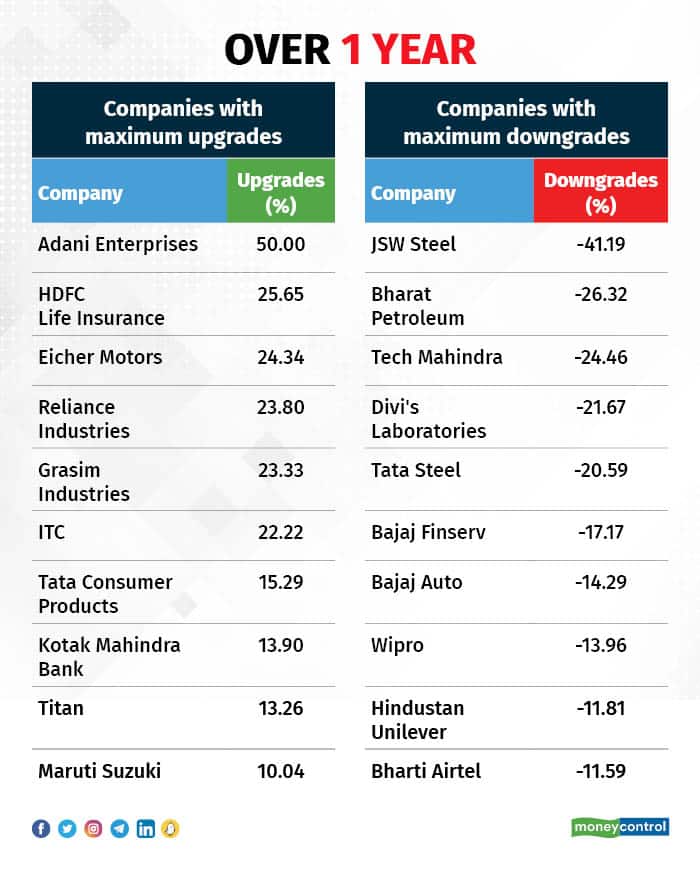 HDFC Life went from 28 'buy' calls to 31 'buy' calls over the last one year as the company's acquisition of Exide Life inched towards the finish line. The merger will add 1.3 percent to HDFC Life's market share, according to the management. While the expensive deal valuation ruffled some feathers, analysts are positive on the newer southern geographies and Tier-2, Tier-3 cities that HDFC Life will now have access to.

Aditya Birla Group's flagship company Grasim was the next in line for maximum upgrades. Brokerages were particularly impressed by the company doubling its capex to Rs 10,000 crore by FY25 to set up the paints business and start production from the fourth quarter of 2023-24. Foreign brokerage firm Jefferies has called this the 'Jio moment' for the paints industry.

Meanwhile, steel major JSW Steel and oil PSU Bharat Petroleum continued to top the list of maximum downgrades in the past one year. JSW Steel saw its 'buy' calls go down from 19 to 6 on the back of falling metal prices and export duty imposition earlier in the year.

Despite the rollback of export duty in November, not many brokerages upgraded their rating on the stock. According to CLSA, a "broad-based policy stimulus in China — which is likely to drive steel prices higher — is the key determinant." Tata Steel, too, saw its downgrades increase in the past twelve months.

BPCL's 'buy' calls plunged down to 25 from 35 in November last year as brokerages removed the privatisation premium from the stock. Union Oil Minister Hardeep Singh Puri has indicated there is "no proposal whatsoever" on his table regarding a BPCL divestment as of now.

Tech Mahindra and Wipro are the other big names that saw downgrades increase as a looming recession in the US and European Union could spoil their fortunes in these markets.

On the flipside, their peers HCL Tech and Infosys managed to earn rating upgrades over the last quarter after surprising the Street with their Q2FY23 numbers. In fact, Infosys has been narrowing its revenue gap with Cognizant, noted Kotak Securities. "Infosys' quarterly revenue run-rate of $4.55 bn is just $300 mn away from Cognizant's revenues. Infosys' headcount at 345000 employees is just 4000 shy of Cognizant's. We would not be surprised if Infosys reclaims revenue leadership in the coming quarters," the brokerage firm noted.

The Street has also been enthused by the IT major's open market share buyback programme amounting to Rs 9,300 crore, at a maximum price of Rs 1,850 per share.

Also Read: Infosys buyback to enhance earnings per share and return on equity

"Consistency in revenue growth in services and improving EBIT growth should drive re-rating. Valuation being at a steep discount to peers makes risk-reward favourable," said Morgan Stanley about the stock.

Apart from Divi's Labs, Tata Motors and BPCL, telecom operator Bharti Airtel saw its downgrades increase slightly over the last quarter. 'Buy' calls on the stock went down from 30 to 28. 'Hold' calls went up to 4 from 2. Analysts were anticipating a tariff hike by the company in the last quarter to improve ARPUs (average revenue per user).

Airtel started testing the waters by raising tariffs for entry-level plans in Haryana and Odisha, in the last week of November.

Britannia most-loved, Divi’s Labs shunned by analysts in November have 1466 words, post on www.moneycontrol.com at December 1, 2022. This is cached page on Business News. If you want remove this page, please contact us.