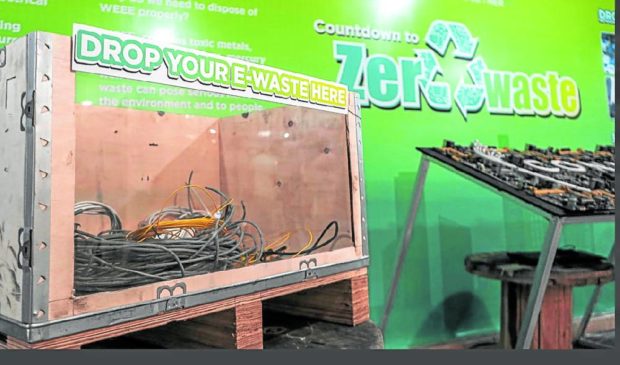 DROP BOX This is where your e-waste goes.—Contributed photo

Technology is enabling companies to forge on with their sustainability initiatives, such as using smart tools to improve energy use efficiency and maximizing digital platforms to reduce the need for printing documents. However, there is a tendency that companies may just trade one thing for another and still end up harming Mother Nature.

The rise of technology has resulted in piling up of electronic waste or e-waste—such as discarded computers and telecommunication equipment and consumer devices—from 33.8 million metric tons (MT) in 2010 to 53.6 million MT in 2019, according to Statista.

Converge ICT Solutions Inc., which has been mindful of its own environmental impact, recognizes this major problem.

"E-waste is one of the fastest-growing waste streams in the world because we are digitizing our economies. Everyone has electronic gadgets now; our TVs are getting bigger, and home appliances are becoming more accessible," Converge chief strategy officer Benjamin Azada points out.

Most recently, the internet service provider pledged to eliminate waste to landfill output by 2030 through the implementation of a circular economy model, or the practice of reusing materials up to the extent possible.

"This year, we are putting more of the guidelines into practice to ensure that our wastes are recycled, reused and treated properly," she explains.

On Nov. 18, the listed company kicked off the collection of discarded electronic devices and equipment from employees, which will be repurposed into something productive.

Converge is doing so through its partnership with John Trix Trading and Green Antz Builders, both experts when it comes to turning solid waste, like e-waste, into useful materials.

John Trix, for example, can convert the waste into plastic pellets, which are raw materials for the manufacturing of furniture. Green Antz, meanwhile, produces eco-friendly bricks used for construction of houses.

Apart from these, Azada shares that they have been refurbishing old Wi-Fi modems as part of their waste reduction initiative.

What Converge does is to recover the modems that are no longer being used by their customers due to upgrade or ending of the contract. Azada says they clean and restore them so the devices can be reused. Over 50,000 of such devices have been refurbished since March.

"What we want to do is maintain or prolong the use of equipment, allow sharing of material equipment, reuse and redistribute. If all else doesn't work, at the very end, we want to recycle," says Azada.

Converge also has a partnership with KreAtions, which "upcycles" its discarded tarpaulins into bags, mats and other household items.

"This initiative is particularly important because we know that the improper disposal of waste has a direct impact on climate change. Everyday, we see the impact of climate change on our environment," Uy says.

Prior to the announcement of their waste reduction initiatives, Converge showed its commitment to decreasing its carbon footprint by tapping into renewable energy sources.

Its headquarters in Pasig and data center in Pampanga are running on geothermal energy supplied by First Gen Corp.

Last year, the fiber broadband provider inked a 48-megawatt (MW) clean energy supply agreement for its Pasig office with the power firm. The 14.4-MW supply deal for its Pampanga data center was secured in April.

Data centers have been designed using smart modular data so that airflow and air conditioning are efficient, avoiding waste of electricity, Azada explains.

Converge is currently building another data center in Cebu. Azada says the goal is to make it 'green' as well.

"We went into high gear. First things first, we looked at one of the biggest impact we have and it is energy consumption," Azada says.

About 80 percent to 90 percent of Converge's total energy consumption is so far covered by renewable sources.

The sustainability efforts by the internet service provider are among its overall strategies as it scales up operations. It aims to reduce greenhouse gas emissions by 75 percent by 2030 and achieve 'net zero' by 2050.

Converge vows ‘zero waste’ by 2030 have 875 words, post on business.inquirer.net at November 27, 2022. This is cached page on Business News. If you want remove this page, please contact us.