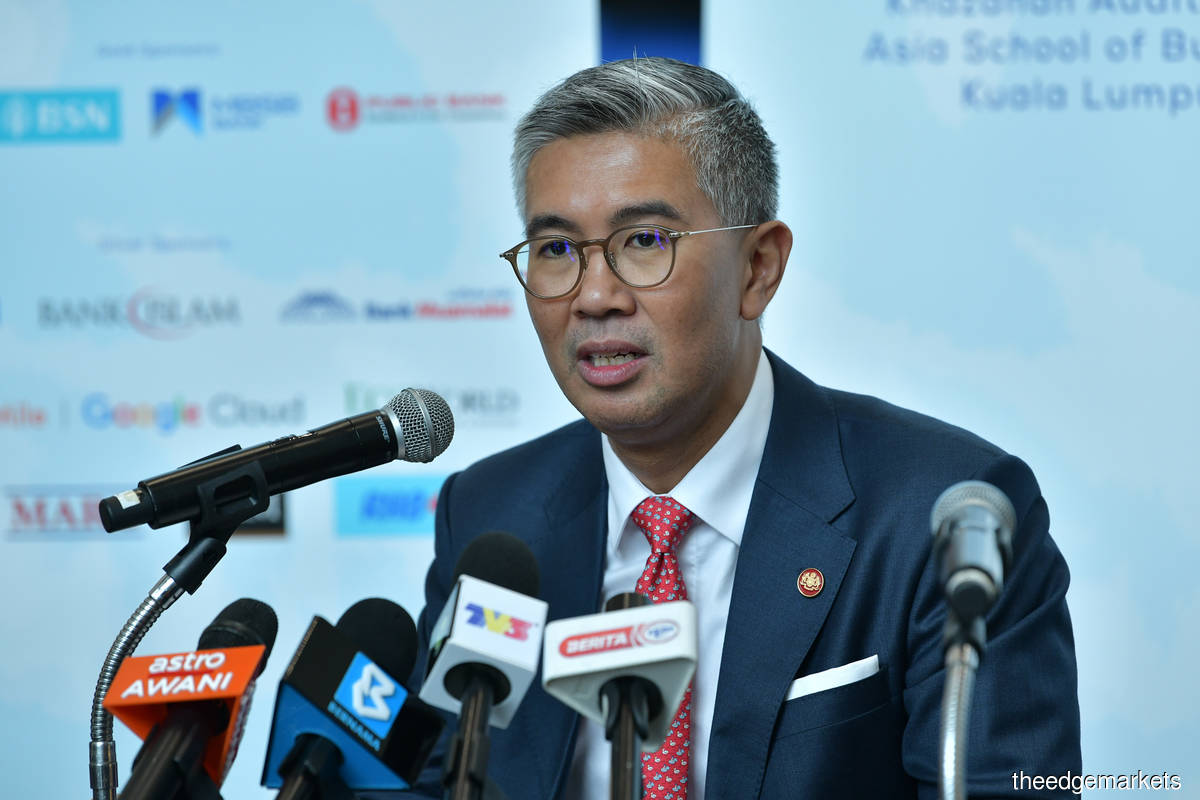 The country is not facing a financial or economic crisis as in the years 1998, 2009 and 2020, as during those years gross domestic product (GDP) contracted, Tengku Zafrul stressed, adding that the Government is confident that this year's GDP growth will surpass the original projection of between 5.3% and 6.3%. (Photo by Zahid Izzani Mohd Said/The Edge)

KUALA LUMPUR (Oct 1): The Government will continue to focus on strengthening the economic fundamentals and structural reforms to ensure that the country's economy remains stable following the ringgit's depreciation against the US dollar.

Finance Minister Tengku Datuk Seri Zafrul Tengku Abdul Aziz said as stated by the World Bank, there is no quick and easy fix for the ringgit's weaknesses compared to a strengthening US dollar.

Being a small and open economy, Malaysia is not spared the fallout from challenges confronting the whole world, he said in a statement issued on Saturday (Oct 1) in response to various reports, concerns and questions put forward to his ministry, especially relating to the ringgit's position and current developments in the nation's economy.

Among others, he said, the Government will ensure that the current account always remains in surplus, driven by exports that continue to rise, and that the country does not experience a twin deficit.

Furthermore, Tengku Zafrul said, the Government will continue its fiscal reform measures, including the tabling of the Fiscal Responsibility Act towards the end of 2022.

"The Government will also diversify the nation's economic structure and activities, particularly emphasising sectors that focus on the sustainability and environmental, social and governance (ESG) aspects as well as the digital economy," he said, adding that these will create job opportunities that may offer higher salaries to the people.

Of equal importance is that the country's financial system and stock market continue to function well and in an orderly manner, he said.

To date, there has been no disruption to financial intermediation and lending activities have continued to run smoothly, he noted.

"Business activities continue to have access to financing from banking institutions and the capital market. Meanwhile, the stock market continues to show a net inflow of RM6.7 billion from foreign investors and RM2.3 billion from retail investors," he added.

"Moving forward, the Government is committed to ensuring that the well-being of all Malaysians is protected, whether households, individuals or businesses. This has been set in motion with the planning of Budget 2023, which will be tabled on Oct 7," he said.

The country is not facing a financial or economic crisis as in the years 1998, 2009 and 2020, as during those years gross domestic product (GDP) contracted, Tengku Zafrul stressed, adding that the Government is confident that this year's GDP growth will surpass the original projection of between 5.3% and 6.3%.

He also said that proactive government measures which have been announced, such as the subsidy allocation of almost RM80 billion that includes price controls for various essential goods, will continue to cushion the people from the impact of price increases driven by external factors that are beyond the Government's control.

Tengku Zafrul said the Government will also continue with people-friendly projects with high-multiplier-effect value such as improving people's housing, flood mitigation, water, electricity, internet and 5G infrastructure, as well as public transportation such as the Mass Rapid Transit 3 (MRT3) and Pan Borneo Highway.

Zafrul: Malaysia remains focused on enhancing economic fundamentals, structural reforms have 850 words, post on www.theedgemarkets.com at October 1, 2022. This is cached page on Business News. If you want remove this page, please contact us.