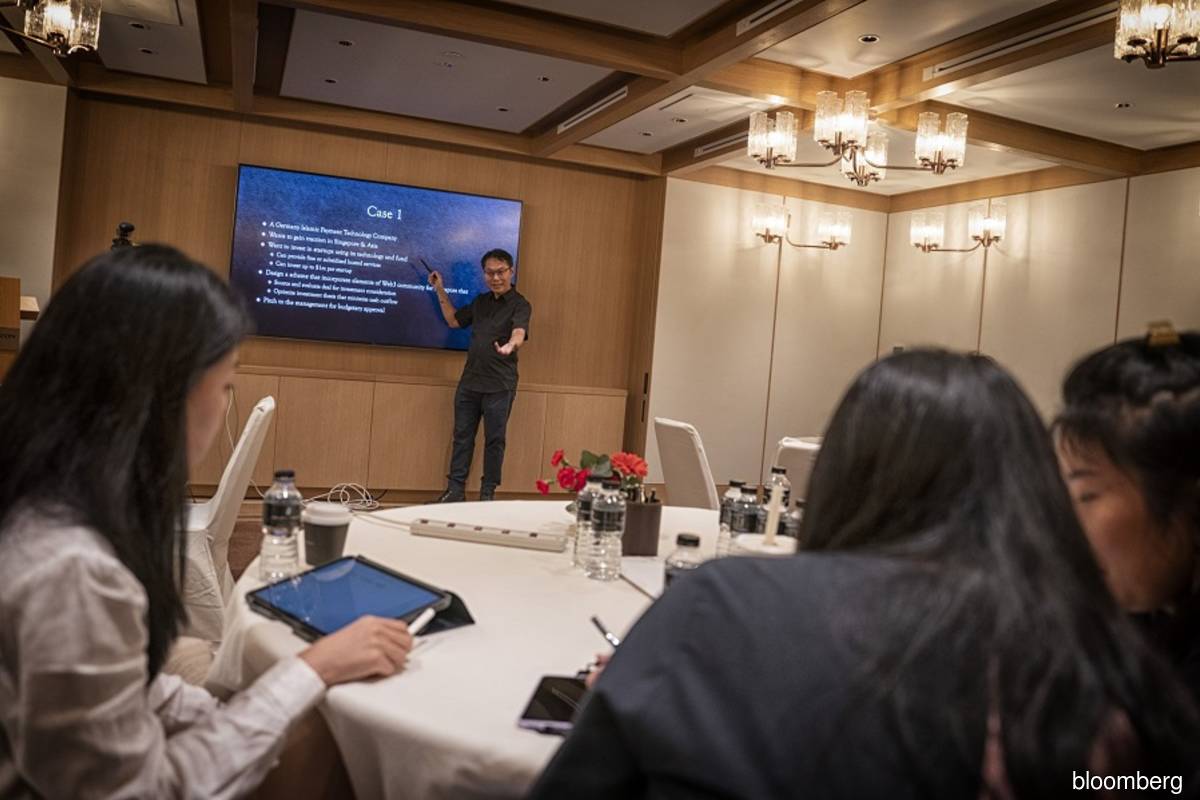 In the bowels of Singapore's Ritz-Carlton hotel 12 young people in gray hoodies sipping bubble tea could be mistaken for a university study group on first glance. That's until you look down and see the Balenciaga sneakers and US$4,000 Christian Dior book totes.

The sessions that include the nuances of crypto art are part of a week-long event run by the Bank of Singapore, one of those tentatively resuming physical programmes despite the awkward potential risk of infecting some of their richest scions. While the private banks tried to replicate in-person shindigs with Zoom seminars and learning portals during the pandemic, these didn't always succeed in sufficiently engaging the next generation.

Trillions of dollars in Asian wealth will likely shift to the next generation this decade as the region's elders — many of whom built businesses that dominate their respective economies — transfer their fortunes. Financiers who fail to build loyalty among the affluent young and prove their value will likely lose out on lucrative accounts and access to deals.

"I would fly around the world just to be somewhere in person," said Benjamin Hort, a 19-year-old from the Czech Republic who attended the Bank of Singapore session. "Going into online, I'll just turn my camera on and go to sleep."

There have been plenty of tweaks from pre-Covid-19 days. The Michelin-starred restaurant meals and gala dinners are tapered for safety reasons and the sessions are often shorter — for participants still wearing face masks an entire day is impractical. But the necessity of such relationship building events has never been stronger.

Seventy-two of Asia's 141 richest people are older than 60 and and have fortunes of US$1.1 trillion, according to the Bloomberg Billionaires Index.

For the banks, it's vital to get clients while they're young — the wealthiest clans will typically have several private banking relationships across the breadth of their personal and professional lives despite the added cost each one entails; demonstrating value and building rapport is key to keeping the account when the kids take over or become independently wealthy.

The Bank of Singapore's "entrepreneur boot camp" in May was the first in a series of real world events slated for this year. Another is planned for October, with around 40 attendees expected — masks optional. Others are also gearing up. Citi Private Bank has resumed group dinners in key cities and Lombard Odier is planning to hold its first physical next-gen gathering in Singapore within months. Outside of Asia, the banks say things are resuming more rapidly.

"We are not targeting next-gens where we think 'he's likely to get in the money and will probably open an account in the next two years'," said Lee Wong, the Singapore-based head of family office services in Asia at Lombard Odier. "It's more that we believe they come from a family that we either already have a banking relationship with or a family we hope to build a relationship with and entrench it."

One big change for most banks as they return has been a decline in organised revelry. Where the Bank of Singapore's 2019 event featured cocktail events and a gala dinner at an award-winning restaurant, 2022 involved bento box lunches, desert plates and a single post-event drinks session.

For Donna Leong, Citi's head of marketing and sales based in Hong Kong, the era of the epic "boondoggle" is largely over. Instead, the bank is experimenting with smaller events, from a 40-person lunch about the metaverse and non-fungible tokens to intimate dinners allowing small groups of about 30 next-gens to meet with top banking executives in key cities including London, New York, Mexico City and Singapore.

In September, it hosted a small group of scions from each region at the University of Cambridge Judge Business School. There, they learned how to take over the family business, mastering emotional intelligence and leadership, and pivoting operations in face of disruption.

"The new firms that want to get in the game will be more gimmick-centric but I think the larger institutions tend to be more content-based," Leong said. "And when you're talking about next-gens they have the resources — it's just a matter of getting them together. Once they meet up, who's to say they can't go on their own boondoggle?"

Back in Singapore, that's proving accurate. Faced with a stretch of empty nights, the cohort organised their own outings to some of Singapore's brightest sights, participants who asked not to be named discussing personal business said.

One local heir took her classmates to the boutique cafe she owns, while others brought the group to award-winning cocktail bars and even a risqué karaoke lounge for a uniquely old-school Asian business experience — all without the involvement of the bank's staff.

"It's super interesting to interact with cultures like that because it really gives you a different perspective into how you see things," said Hort, who is also a web3 entrepreneur. "Whenever they come to Europe, they just need to let me know and I'll take care of them."

Rich kids’ boot camps return as private banks woo next-gen wealth have 1163 words, post on www.theedgemarkets.com at October 3, 2022. This is cached page on Business News. If you want remove this page, please contact us.