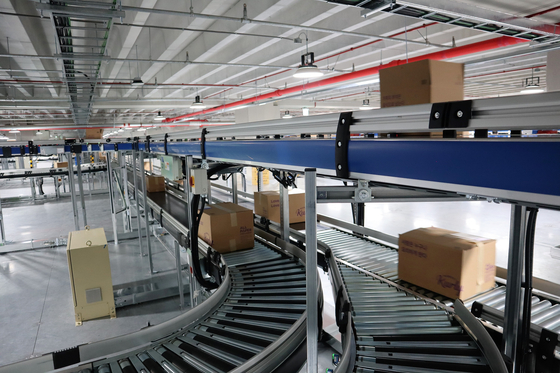 Retailers are giving up dawn deliveries in favor of new business models as the market makes it almost impossible to turn a profit, hurting initial public offering (IPO) valuations of companies as the industry goes down.

Dawn deliveries, or orders made as late as midnight but guaranteed to arrive by early morning the next day, took the Korean market by a storm as delivery demand surged during the Covid-19 pandemic. Kurly, operating Market Kurly, first started offering the service in Korea in 2015, and Coupang followed in 2018, becoming the two biggest players in the dawn delivery market.

Other companies rushed to offer their own dawn deliveries as the market grew, with the 2.5-trillion-won ($1.7-billion) market in 2020 projected to jump to 11.9 trillion won in 2023.

Although the market has potential, companies are tapping out as the business requires huge investment. Lotte On and BGF Retail's Hello Nature stopped their services in April and GS Retail's online grocery shopping mall GS Fresh Mall stopped in August, all citing profitability problems.

"It's hard to generate profits in the dawn delivery market because it requires a huge amount of money to build facilities such as cold chain storage," said Jung Cue-jin, an analyst at SK Securities. "There are also a lot of competitors already in the market, which makes it hard for one company to receive many orders from customers and expand its market share."

Even the leading companies have been long suffering from losses, with Kurly reporting a net loss of 1.28 billion won in 2021 compared to 97.6 million won the previous year. Coupang reported a net loss of $75.5 million in the second quarter, compared to a loss of $518.6 million in the same quarter the previous year. Although Coupang’s loss is improving, investments toward logistics facilities was one of the biggest struggles for the company, with the company’s Chief Financial Officer Gaurav Anand saying “gross margin declined due to increased investments” in its 2021 earnings call.

Another struggle dawn delivery companies face is high labor costs. Delivery workers have to work throughout the night for the orders to arrive by dawn, and by law those who work between 10 p.m. to 6 a.m. the next morning receive 1.5 times the normal pay.

Costco is one of the few companies that recently decided to tap into the falling market, despite the odds, but is failing to attract customers due to its model that prioritizes profitability too much.

The retailer started offering dawn deliveries for a select 80 products to homes in the greater Seoul area in June. Its dawn delivery products are more expensive by a few hundred won to even a few thousand won compared to the same products sold directly at Costco branches.

The technique is different from other retailers, such as SSG.com, which offers online dawn delivery orders and products sold at Emart, for the same price as in store. SSG.com started dawn deliveries in 2019 and is also suffering a net loss: 82 billion won in 2021, compared to a loss of 33.3 billion won the previous year.

Costco says there is a price difference because some products have to be shipped from its suppliers instead of directly from Costco, and therefore requires extra delivery costs.

The difficulty of generating profits from dawn deliveries is also affecting companies aiming to go public.

Kurly received a pre-IPO valuation of 4 trillion won last year, but its current valuation is expected to be around 2 trillion won. On Stockplus Unlisted, an over-the-counter trading service for unlisted stocks, Kurly reached a peak by trading for 116,000 won per share on Jan. 24, but has since been falling and traded at 36,900 won on Sept. 29.

Despite its falling valuation, the company received preliminary approval for its IPO on Aug. 22, and has within the next six months to go public. If it fails to do so within the timeframe, it will have to resubmit a preliminary review and start over.

"Kurly's market share in the grocery delivery market is increasing, and operating profit is falling as well, which is a positive sign," said Park Jong-dae, an analyst at Hana Investment & Securities. "But its valuation could fall considering its share is still small compared to other big players such as Coupang Fresh, and could face poor performance in the future in a highly competitive market."

Another company slated to go public is Oasis Market, the only company specializing in dawn deliveries that is reporting profits. However, a shadow is looming over its profit that continues to shrink. The company logged a net profit of 4.4 billion won in 2021, down 55 percent on year.

One reason the company has been able to stay in the black is due to doing business not only online but also operating stores nationwide.

Dawn deliveries are possible because each company uses computer-based prediction system to forecast demand, stocking fulfillment centers with products likely to be purchased by customers even before the orders are made, to shorten the overall process. Prediction systems aren't always accurate, and excess grocery orders have to be thrown out, contributing to the companies' growing losses. 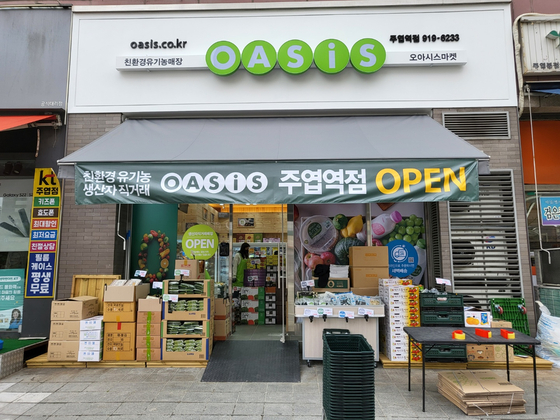 An Oasis Market branch in Goyang, Gyeonggi. Products left over at the fulfillment centers are sent to branches nationwide and sold at a discounted price to minimize losses. [OASIS MARKET]

Oasis Market faces less risk of excess ordering as it has 52 grocery store branches. Leftover products are sent to their branches nationwide and sold at a discounted price, minimizing possible losses.

Although the strategy has allowed it to enjoy profits, some predict that those profits, too, could fall in the long run.

"Being able to generate synergies with offline branches is one reason that Oasis Market stands out," said analyst Park. "But its online sales have become almost twice as big as offline sales, which could make it hard for the company to sell off all unsold items at its stores like it did in the past."

The company applied for a preliminary review on Sept. 8 and is still waiting for approval, but the company’s spokesperson said Oasis Market "aims to go public within this year."

With dawn deliveries posing a big risk to profits, retailers with offline stores are turning to quick commerce deliveries, or delivering products to customers within an hour.

Although GS Retail stopped dawn deliveries in August, it began offering quick commerce deliveries from its discount mart branches, known as GS The Fresh, since May. Unlike dawn deliveries that require huge investments into fulfillment centers, the one-hour deliveries can be offered with existing infrastructure.

“GS Retail has an advantage in the quick commerce market because it doesn’t need additional fulfillment centers in the city and can use its offline stores,” said Cho Sang-hoon, analyst at Shinhan Investment. “It has over 16,000 convenience stores and discount marts nationwide, which gives it an upper hand in the delivery market.”

Lotte Shopping, which operates Lotte On, switched to offering deliveries from its Lotte Mart branches, taking on a similar strategy to also utilize its existing branches as logistics hubs.

Retailers ditch dawn deliveries in favor of more profitable options have 1323 words, post on koreajoongangdaily.joins.com at October 3, 2022. This is cached page on Business News. If you want remove this page, please contact us.