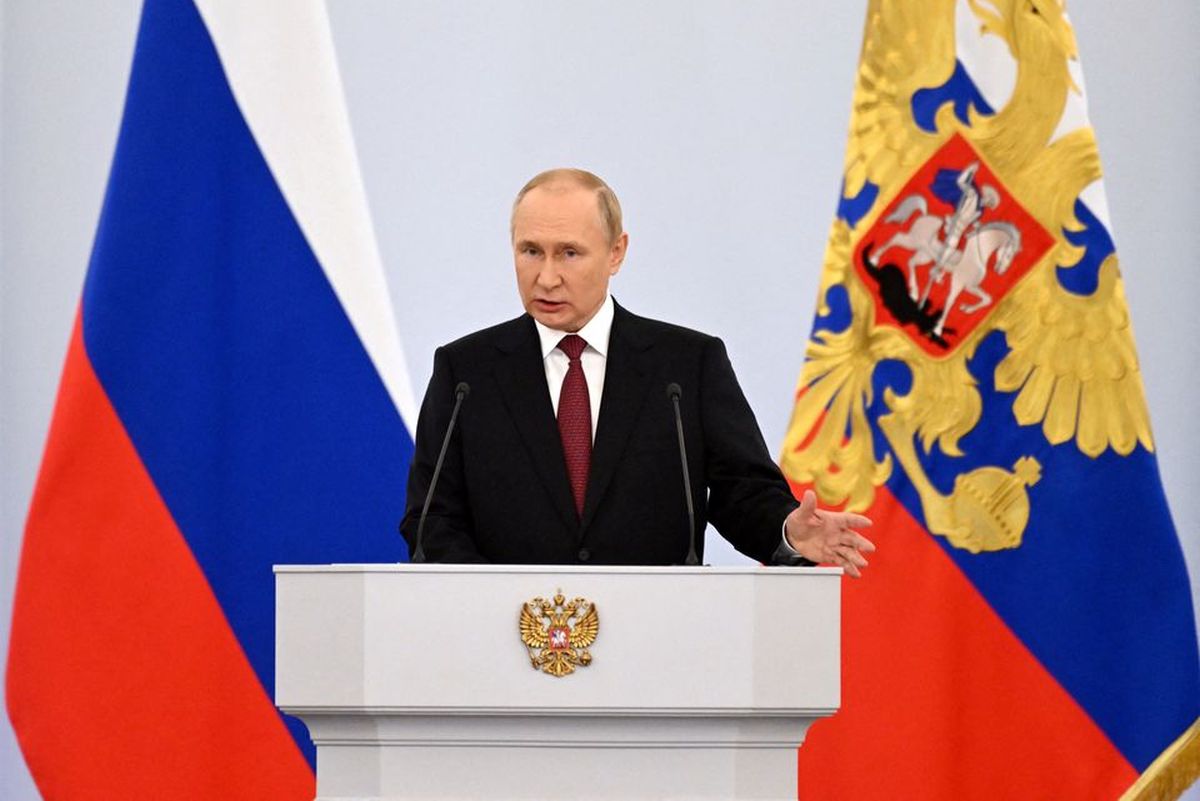 KYIV (Oct 5): President Vladimir Putin signed a law to incorporate four partially occupied Ukrainian regions into Russia on Wednesday, in what Kyiv called the act of a “collective madhouse” at a time when Russia’s forces have been fleeing from the front lines.

The new law would incorporate around 18% of Ukraine’s territory into Russia, equivalent to the area of Portugal, in Europe’s biggest annexation since World War Two.

Russia does not fully control any of the four provinces it claims to have annexed, however, and Moscow has yet to demarcate what it now asserts to be Russia’s new borders.

Ukrainian forces have recaptured thousands of square miles of territory since the start of September, including dozens of settlements in just the past few days.

A new map published by Russian state news agency RIA included the full territory of the Ukrainian provinces, but some parts were shaded and labelled as being under Ukrainian military control.

“They will be with Russia forever,” Kremlin spokesman Dmitry Peskov said of the new regions, adding that settlements recaptured by Ukraine in recent days “will be returned”.

Putin said Russia would stabilise the situation in the four provinces. In one of his first moves to assert his rule over them, he ordered the Russian state to seize control of Europe’s biggest nuclear power station, still run by Ukrainian engineers despite being captured early in the war by Russian troops.

The UN nuclear watchdog, the IAEA, said it had learned of plans to restart one reactor at the plant, where all six reactors have been shut down for weeks.

Russia announced the annexation of Donetsk, Luhansk, Kherson and Zaporizhzhia provinces after staging referendums that Kyiv and the West say were phoney exercises held at gunpoint. Kyiv says it will never accept the illegal seizure of its territory by force.

The Russian moves come as momentum in the war has clearly swung in Ukraine’s favour since the start of September.

Thousands of Russian troops fled their positions after the front line crumbled, first in the northeast, and, since the start of this week, also in the south.

“Worthless decisions by a terrorist country are not worth the paper they are signed on,” Andriy Yermak, head of Ukraine’s presidential office, said on Telegram of the annexation moves, which he said reminded him of a “collective madhouse”.

Ukraine has so far given few details of its most recent military gains, in line with a policy of withholding comment about advances while they are under way.

“This week alone, since the Russian pseudo-referendum, dozens of population centres have been liberated. These are in Kherson, Kharkiv, Luhansk and Donetsk regions all together,” President Volodymyr Zelenskiy said in his nightly address on Tuesday.

Putin’s order to seize control of the Zaporizhzhia nuclear power station could be one of the first major practical consequences of the annexation move.

The power station is located right on the front line, on a Russian-controlled bank of a giant reservoir with Ukrainian forces on the opposite bank, and both sides have warned of the danger of a nuclear disaster from fighting near it.

In recent days, Russia detained the Ukrainian manager in charge of the plant. He has since been released but will not return to work.

The head of Ukraine’s state nuclear energy company Energoatom, Petro Kotin, said he was now taking charge of the plant and urged workers not to sign any documents with its Russian occupiers.

Kyiv has long accused Moscow of planning to switch the plant from Ukraine’s power grid to Russia’s, a move it says would heighten the risk of an accident.

IAEA head Rafael Grossi, who is due to visit Kyiv and Moscow this week, posted on Twitter a picture of himself boarding a train for Kyiv and said negotiations on a safe zone around the plant were more important than ever.

The European Union agreed a new package of sanctions on Wednesday to punish Russia for the annexation plan. The measures include more restrictions in trade with Russia in steel and tech products, and an oil price cap for Russian seaborne crude deliveries through European insurers.

On the battlefield, Russian forces that have been forced to retreat in recent days have dug in at new positions where they hope to halt the Ukrainian advance, officials on both sides have said.

Russian defence ministry maps presented on Tuesday also appeared to show rapid withdrawals of Russian forces from areas in eastern and southern Ukraine. After months of official proclamations that the “special military operation” is “going to plan”, commentators on Russian television have acknowledged the setbacks.

Putin responded to the loss of territory two weeks ago by announcing the annexation plan, ordering the call-up of hundreds of thousands of reservists and threatening nuclear retaliation to protect Russian land. Tens of thousands of Russian men have since fled the country to escape the draft.

In the east, Ukrainian forces have been expanding an offensive after capturing the main Russian bastion in the north of Donetsk, the town of Lyman. They are now pushing into Luhansk province, which Moscow had claimed to be totally under its control after some of the war’s heaviest fighting in June and July.

In the south, the Ukrainians have recaptured a swath of territory in Kherson province along the west bank of the wide Dnipro River, threatening to cut thousands of Russian troops off from resupply or escape.

Putin finalises 'annexation' in Ukraine even as troops flee front have 1128 words, post on www.theedgemarkets.com at October 6, 2022. This is cached page on Business News. If you want remove this page, please contact us.