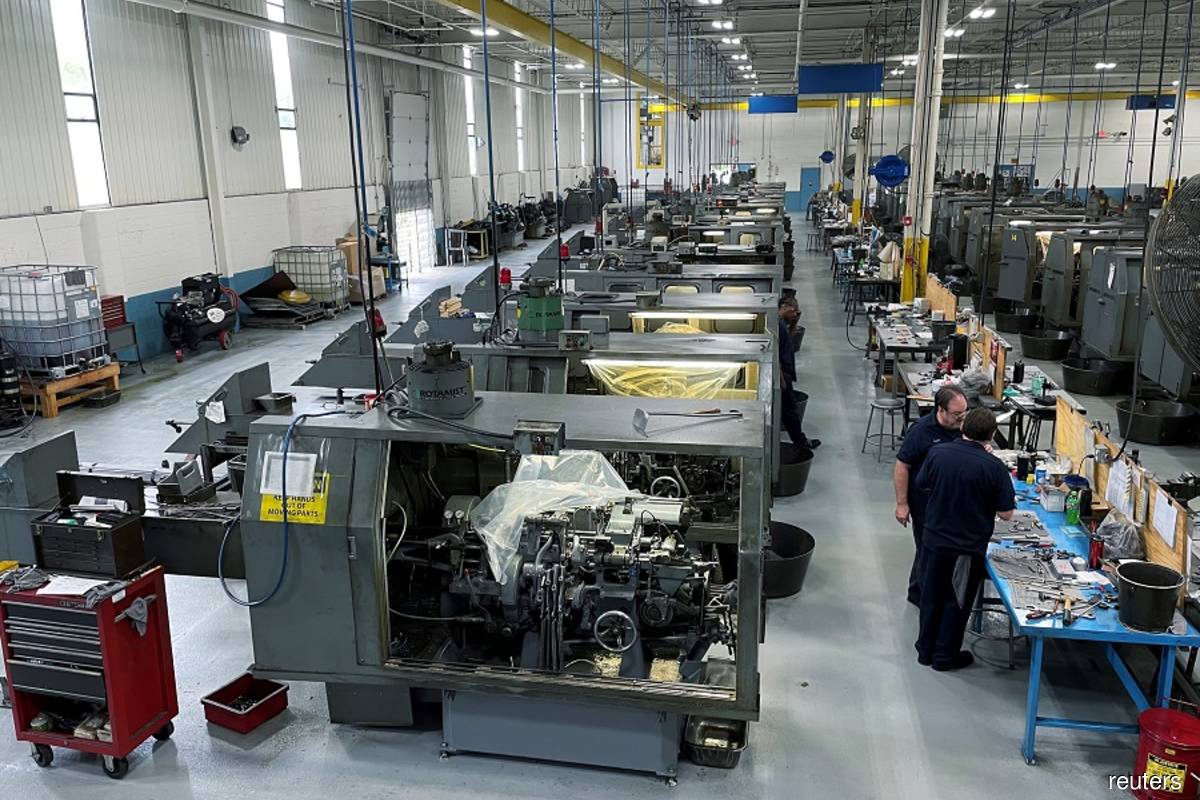 WASHINGTON (Sept 27): New orders for US-manufactured capital goods increased more than expected in August, suggesting businesses remained keen to invest in equipment despite higher interest rates, which could keep the economy on a moderate growth path.

Some of the largest gain in orders in seven months reported by the Commerce Department on Tuesday, however, reflected higher prices. The data suggested that business spending on equipment probably rebounded in the third quarter, further dispelling fears that the economy was in recession.

That was reinforced by a survey showing consumer confidence rising for a second straight month in September, supported by a resilient labour market, which continues to churn out jobs at a brisk clip and generate strong wage gains, as well as falling gasoline prices. More consumers planned to buy big-ticket items like motor vehicles and household appliances over the next six months, which should help underpin consumer spending.

“It is hard to know whether companies are ordering up more widgets to produce the goods and provide the services for a stronger economy in the future, or whether the jump in spending reflects the higher prices from inflation that remains out of control,” said Christopher Rupkey, chief economist at FWDBONDS in New York. “The economy may be more resilient than we think.”

Orders for non-defence capital goods excluding aircraft, a closely-watched proxy for business spending plans, surged 1.3% last month. That was the biggest gain since January. Data for July was revised higher to show these so-called core capital goods orders gaining 0.7%, instead of 0.3% as previously reported. The data is not adjusted for inflation.

Economists polled by Reuters had forecast core capital goods orders rising 0.2%. There were increases in orders for machinery, primary metals, computers and electronic products, as well as electrical equipment, appliances and components. But orders for fabricated metal products fell.

Business spending on equipment contracted by the most in two years in the second quarter. That, together with a sharp slowdown in the pace of inventory accumulation, resulted in GDP contracting at a 0.6% annualised rate last quarter, after declining at a 1.6% pace in the January-March period.

But the economy was not in recession in the first half, with the income side of the growth ledger showing moderate expansion. Goldman Sachs is forecasting GDP rebounding at a 1.2% rate in the third quarter.

The economy is hanging on, despite the aggressive monetary policy tightening by the US Federal Reserve to fight inflation.

The US central bank raised its policy interest rate by 75 basis points last week, its third straight increase of that size. It signalled more large increases to come this year.

Stocks on Wall Street were trading lower after a brutal beating over the last six sessions. The dollar was steady against a basket of currencies. Longer-dated US Treasury prices fell.

A second report from the Conference Board on Tuesday showed its consumer confidence index rose to 108.0 this month, from 103.6 in August, beating economists’ expectations for a reading of 104.5. Households’ worries about inflation eased, largely reflecting lower gasoline prices.

Consumers’ 12-month inflation expectations slipped to 6.8%, the lowest since January, from 7.0% in August.

The survey’s so-called labour market differential, derived from data on respondents’ views on whether jobs are plentiful or hard to get, rose to 38, from a reading of 36 in August. This measure correlates to the unemployment rate from the Labor Department and points to a still-tight jobs market.

“The labour market differential suggests that joblessness fell in September, contrary to the Fed’s goal of creating slack in the labour market to bring down wage growth,” said Bernard Yaros, an economist at Moody’s Analytics in West Chester, Pennsylvania.

There were increases in the share of consumers planning to buy motor vehicles and appliances such as refrigerators, washing machines and vacuum cleaners over the next six months. But consumers were less inclined to buy a house, as soaring mortgage rates and still-high home prices eroded affordability.

While a third report from the Commerce Department showed new home sales surged 28.8% to a seasonally-adjusted annual rate of 685,000 units in August, that was likely due to builders offering incentives to clear inventory.

With the 30-year fixed mortgage rate now at levels last seen during the Great Recession, the rebound in new home sales is likely temporary.

There was, however, some good news for prospective buyers, who have been priced out of the market.

A fourth report on Tuesday showed that the S&P CoreLogic Case-Shiller national home price index increased 15.8% year-on-year in July, slowing from an 18.1% advance in June. On a monthly basis, prices fell 0.3% in July, the first drop since late 2018.

The cooling house price inflation was corroborated by a fifth report from the Federal Housing Finance Agency, showing home prices increased 13.9% in the 12 months through July, after rising 16.3% in June. Prices fell 0.6% on a monthly basis.

An outright house price collapse, however, is unlikely, as housing remains in short supply.

“Rapid home price deceleration was anticipated given the Fed’s actions, and will bring home price growth closer, in line with income growth,” said Selma Hepp, deputy chief economist at CoreLogic. “Returning to a long-term average of 4% to 5% annual price growth is closer than initially anticipated, potentially by early 2023.”

US core capital goods orders surge; consumer confidence rises further have 1078 words, post on www.theedgemarkets.com at September 28, 2022. This is cached page on Business News. If you want remove this page, please contact us.