Sony recently launched several new X-series speakers in India. The three new models included the SRS-XG300, SRS-XE300 and SRS-XE200. Of the three speakers, Sony sent us the SRS-XE200, a portable speaker that is designed for outdoor use.

The Sony SRS-XE200 portable Bluetooth speaker is priced at Rs 12,990 on Amazon India. Before we get into the review, let's take at what's in the box. First off if the XE200 speaker itself, a USB-C to USB-A charging cable, and a quick-start guide. Lastly, the box itself is made of recycled material, compromising of around 5 percent plastic. Now, let's move on to the Sony SRS-XE200 review.

The Sony SRS-XE200 is a mid-sized portable Bluetooth speaker that features a rugged yet stylish design. For the build, the speaker is wrapped in fabric mesh and silicone, which is soft to the touch but feels a little slippery. Additionally, there's a rubber flap that covers the USB-C port on the back of the speaker. The SRS-XE200 also has an IP67 rating for dust and water resistance, up to a metre for 30 minutes. Now, Sony does claim that the speaker can survive a few bumps, which should be the case considering it is designed for outdoor use. The XE200 also has a removeable carrying strap on the back that can be tied to a backpack. The portable speaker also has a pentagon/hexagon shape with two plates on the top and bottom to allow it to stand firmly on a surface. The XE200 is primarily meant for use in vertical orientation but you can use it horizontally if you so choose. All the buttons sit on one side of the speaker with the Sony logo visible at the bottom. The Sony SRS- XE200 Bluetooth speaker comes in Silver, Blue, Black, and Orange colours.

The speaker has quite a few buttons on the back that control various functions as well as LED indicators. The buttons can be used to control volume, pair the speaker through Bluetooth, mute the mic, and power the speaker. You can also switch to the Stamina mode with the push of a button on the speaker. Lastly, there's a USB Type-C port on the back to charge the speaker. There's also no Aux-in port, so Bluetooth connectivity is all you are left with.

The XE200 speaker is meant to be used in vertical orientation, although you can use it horizontally as well. The speaker has a Line-Shape Diffuser to deliver fuller sound, which Sony says is inspired by concert audio setups, in which the speakers push audio out over a wider area. The speaker does have a lot of punch but does lacks that thumping bass. You can improve things with the EQ in the app to tinker with the sound, letting you manually adjust bass, treble, and mids. The XE200 supports SBC, AAC, and LDAC codecs for hi-res playback, although it is hard to discern the differences in the audio codecs. While the volume is loud enough to fill an entire room, it isn't all that sufficient in outdoor scenarios. I also found the sound slightly muffled at max volume. Additionally, the soundstage wasn't all that wide, making it harder to listen to subtle nuances in tracks. Lastly, the XE200 does as excellent job at maintaining audio clarity at up to 90 percent volume. The Sony XE200 speaker also comes with a ClearAudio+ feature to offer more balanced audio performance. 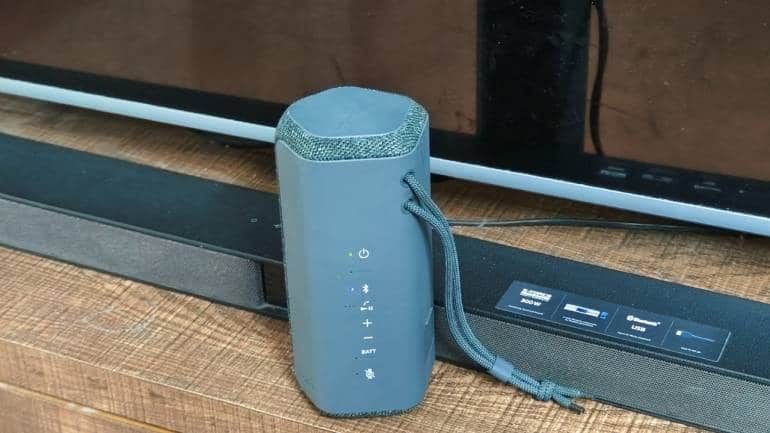 The XE200 also comes with Google Assistant and Siri voice assistants, which work well for the most part, but you will need a compatible smartphone. It registered commands easily from far out despite using it in a nosier room. You also have a mute button, although it can only be used for phone calls. When it comes to taking phone calls, the audio comes in pretty clear, and the mics do a solid job of picking up your voice.

Sony claims that the XE200 speaker can deliver up to 16 hours of battery life per charge. However, 16 hours is a pretty tall claim, and the speaker doesn't quite live up to it. I got around 10 hours on a full charge, although I had volume at 85 percent throughout my usage, which was quite impressive. There's a Stamina mode in the app that helps you preserve battery life, although this mode will change the settings of your speaker to conserve battery life. Additionally, there's a Battery Care feature as well that reduces charging amount to 90 percent, helping extend the speaker's battery life.

The XE200 speaker is accompanied by Sony's Music Center app. The speaker can be easily synced to the app through Bluetooth and can also be used to pair two of the same speakers in a stereo setup. You can also connect the speaker to multiple speakers in room to amplify the audio across a larger room. The app also has an EQ to customise the sound to your liking. There's a ClearAudio+ mode and you can choose whether you want to use the speaker in mono or stereo mode. Additionally, the app also allows you to choose between prioritising connectivity or sound quality. You can also access different music apps or offline audio files directly though Sony's Music Center.

The Sony XE200 is a versatile Bluetooth speaker with good audio quality. Sound quality on the XE200 could be better but the speaker is excellent for your routine weekend chilling session with a couple of friends. I used it on the terrace with a few friends during the rains and the audio still came through clearly despite a lot of ambient noise. The speaker also comes with good voice support and a highly convenient companion app. The XE200 also has a rugged design and build as well great battery life and easy to access controls. So should you buy the Sony XE200 portable Bluetooth speaker; that's an easy yes! Sony has built a well-rounded speaker that's built to last and withstand various outdoor environments, although I still believe the overall sound quality could be better. And all of this does come with a reasonable price tag, which is the cherry on top.

Sony SRS-XE200 Review | A well-rounded speaker that is built to last have 1228 words, post on www.moneycontrol.com at September 27, 2022. This is cached page on Business News. If you want remove this page, please contact us.