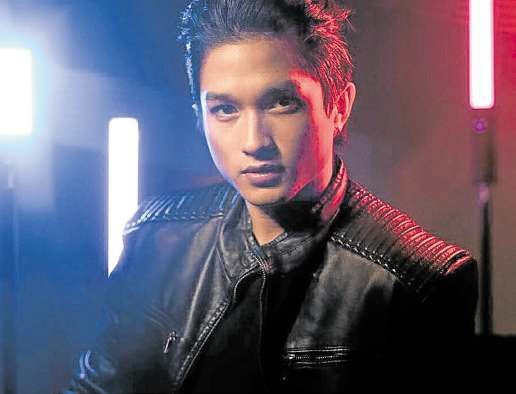 Gold said he would encourage his girlfriend to watch Law Fajardo's "Scorpio Nights 3," which features Christine Bermas as his leading lady. "I would tell her, 'You have to be ready to see projects like this because this is what I do for a living.' The problem is, I don't have a girlfriend anymore," he told Inquirer Entertainment during a recent virtual media gathering.

"Just the same, this person who I will eventually choose to become my life partner should understand and fully accept the kind of work that I do. I don't think this should be difficult, especially when we put importance on communication. Lahat nadaraan sa mabuting usapan," Gold pointed out.

He admitted that his love scene with Christine—his first since he started acting in 2012—is also something to talk about. "Nasobrahan ako. We really went extreme on this one," he declared. "I'm just glad that we were able to pull it off. Yes, you can say it was a 'love scene.' I've done others before, but they were basically kissing scenes. With this one, everything felt real. Christine and I struggled with different emotions—happiness, nervousness, kilig and even gigil. It was a difficult scene to do, but we gave it our all."

Gold said he took time to really study his character in order to portray him well. "My goal was for the audience to see that Matthew Bravo is a real person and that the situations he goes through in the film also happen in real life. Matt is a college guy who is out to explore. However, the film is careful to point out that everything has its limitations. Matt is about to discover his limits," the actor explained.

Gold said he also took time to watch the original "Scorpio Nights," which was released in 1985 and directed by the late Peque Gallaga. "Daniel Fernando is something else! He really played his character well. Only Sir Daniel can do what he did in the original. I was given the rare opportunity to be part of the third version so I owned it, too. All I can say is that Matt is younger, more adventurous, and more pasaway," Gold declared.

The second version, released in 1999, was directed by Erik Matti and featured Joyce Jimenez and Albert Martinez.

The recent media gathering was meant to announce that Gold's career will be comanaged by Viva Entertainment and O/C Artist House, which was founded by former Callalily frontman Kean Cipriano.

Gold is the first actor to be managed by O/C. The two men first met when Gold acted on a music video that Kian produced in collaboration with Viva.

"I sat down with Kuya Kian and told him, 'I only want two things: To be rich and popular. It's that simple.' For now, I'm fine with living a simple life. I appreciate being able to go to SM whenever I want to, being able to stroll inside the mall and not worry about anything. Of course, I'm expecting my life to change soon. Kuya Kian and I also agreed that I need to have a good and steady flow of work. They will continue to look for good projects for me and guide me till the end," the award-winning actor ("Metamorphosis") told Inquirer Entertainment.

Things are doing good so far, Gold said. "I've been with them for four months now and I already signed up for two movies. Another one is already in the works. It has been a steady and smooth-sailing four months. I can say I've made the right decision," he added.

Gold is also part of Mac Alejandre's dramatic piece "May December January," based on a script by Ricky Lee.

Gold said he has already felt the "big difference" between being a freelance actor and being part of a talent management team. "Back then, I had no choice but to keep on waiting for producers to give me projects, and when they did, I had to personally negotiate for my talent fee. These days, ang sarap ng feeling! I don't have to worry about all these things and simply focus on the scripts I have to read and characters to create. My life is a lot easier," he pointed out.

"I used to think that if I hire a manager, I won't be able to work on the projects that I actually like since it's the manager's job to filter all offers. What's good about my team is that they first consult me before turning down or saying 'yes' to possible projects. I'm really feeling the change. In the company, they call me 'Lucky Boy ng O/C,'" he said.

Gold said he has always pursued projects that allow him to portray characters that challenge him. "I can say that I've already done a lot. I tried doing a BL (boys' love) series. I played a killer, a pusher, a bully, and another one who sells balut. I was also a part of a film tackling intersex. Now, I am Matt, who is really pasaway. I know a lot of guys like him," he said.

"I'm OK with doing indie movies, but my plan is to go mainstream and become rich," he said, laughing. "I consider Robin Padilla and Coco Martin as my idols. Both of them started as indie actors. Like them, I want to be given the chance to go mainstream soon."

‘Going extreme’: The different emotions Gold Aceron struggled with in his love scene for ‘Scorpio Nights 3’ have 1393 words, post on entertainment.inquirer.net at August 8, 2022. This is cached page on Business News. If you want remove this page, please contact us.