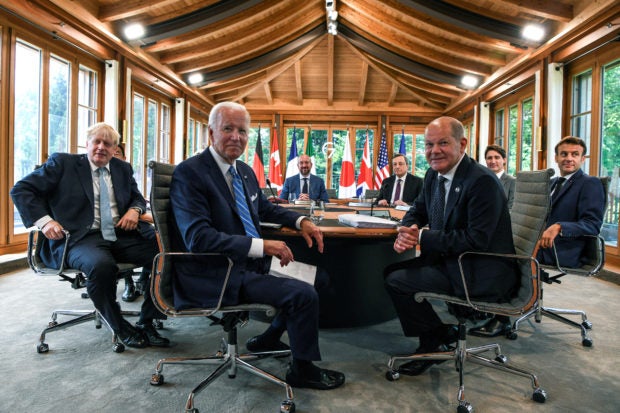 US President Joe Biden attends a working lunch with other G7 leaders to discuss shaping the global economy at the Yoga Pavilion, Schloss Elmau in Kuren, Germany, June 26, 2022. (Kenny Holston/Pool via REUTERS)

WASHINGTON — The United States aims to raise $200 billion in private and public funds over five years to fund needed infrastructure in developing countries under a G7 initiative aimed at countering China's multitrillion-dollar Belt and Road project, the White House said on Sunday.

US President Joe Biden will unveil the plans, flanked by other Group of Seven leaders, some of whom have already unveiled their own separate initiatives, at their annual gathering being held this year at Schloss Elmau in southern Germany.

Increasingly worried about China, G7 leaders first floated plans for the project last year, and are formally launching it now under a fresh title, "Partnership for Global Infrastructure and Investment" while dropping the moniker "Build Back Better World" first coined by Biden during his presidential campaign.

Biden will unveil several specific projects at a G7 side event, joined by leaders from Britain, Germany, Japan, the European Union, and Canada, vowing to focus on projects that help tackle climate change as well as improve global health, gender equity, and digital infrastructure. Notably absent will be French President Emmanual Macron who had formally joined the Chinese infrastructure program.

"The president's not thinking that we need to spend dollar for dollar versus China … though if you add up what the US and the G7 partners are going to be announcing, it comes pretty close to the number," one senior US official told reporters.

The funds would be raised through grants and federal funds, and by leveraging private-sector investments, the White House said, adding that hundreds of billions of additional dollars could come from multilateral development banks, development finance institutions, sovereign wealth funds, and others.

China's Belt and Road Initiative (BRI) scheme, which Chinese President Xi Jinping launched in 2013, involves development and investment initiatives in over 100 countries, with a range of projects including railways, ports, and highways.

Biden will highlight several flagship projects, including a $2 billion solar development project in Angola with support from the Commerce Department, the US Export-Import Bank, US firm AfricaGlobal Schaffer, and US project developer Sun Africa.

Together with G7 members and the EU, Washington will also provide $3.3 million in technical assistance to Institut Pasteur de Dakar in Senegal as it develops an industrial-scale flexible multi-vaccine manufacturing facility in that country that can eventually produce COVID-19 and other vaccines.

The US Agency for International Development (USAID) will also commit up to $50 million over five years to the World Bank's new global Childcare Incentive Fund, a project aimed at addressing the gap in suitable childcare infrastructure.

US to raise $200 billion for G7 vs China’s Belt and Road have 791 words, post on business.inquirer.net at June 27, 2022. This is cached page on Business News. If you want remove this page, please contact us.