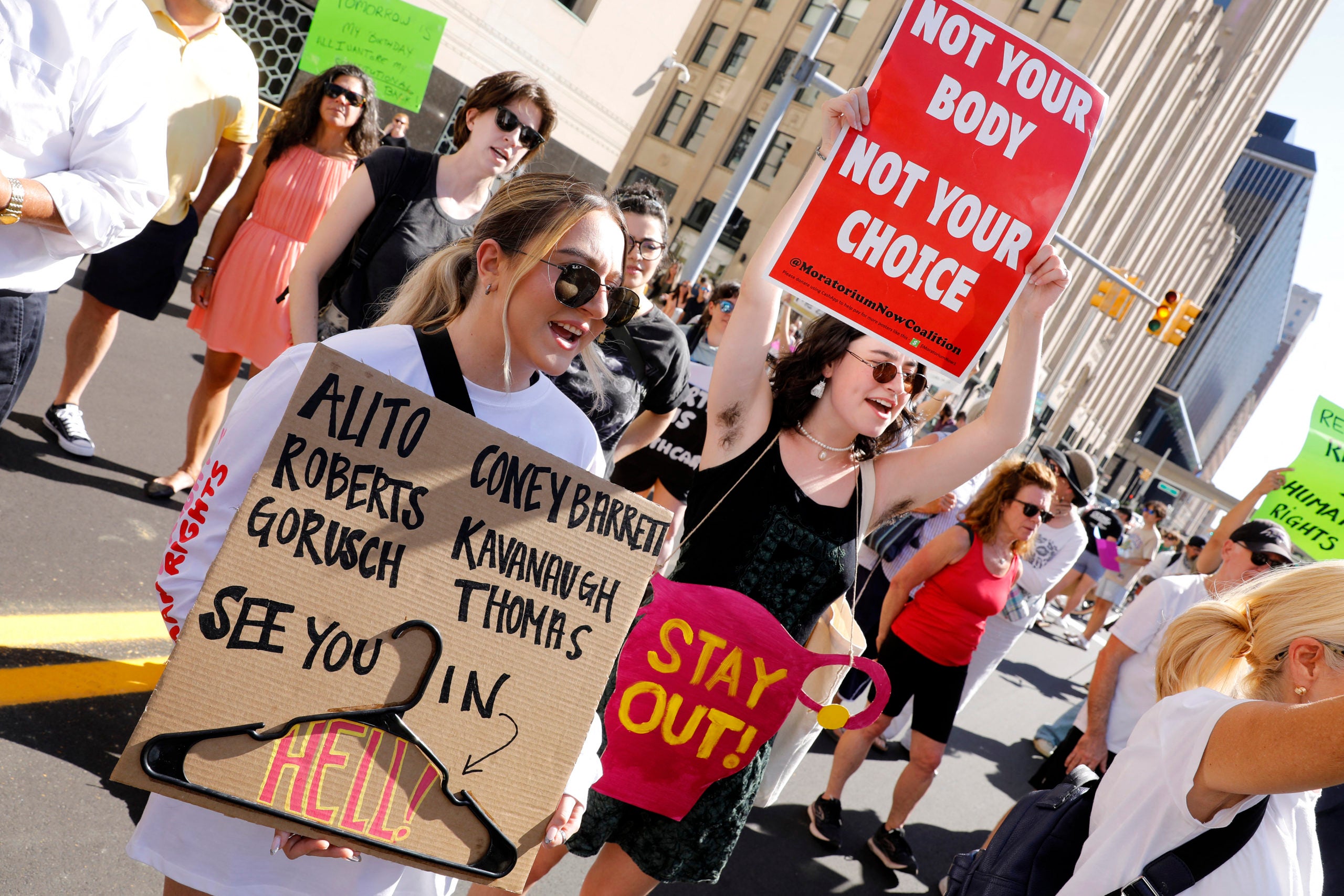 Abortion rights activists protest outside the US Federal Courthouse after the US Supreme Court overturned Roe Vs. Wade, in Detroit, Michigan on June 24, 2022. (Photo by JEFF KOWALSKY / AFP)

WASHINGTON — Protesters were expected to pour onto streets across the United States on Saturday as anger flared over the Supreme Court's decision to strike down the right to abortion .

Several right-leaning states imposed immediate bans on abortion after the court on Friday shredded five decades of constitutional protections for the procedure, prompting leaders around the world to voice concern.

The conservative-dominated court overturned the landmark 1973 "Roe v. Wade" decision enshrining a woman's right to an abortion, saying individual states could restrict or ban the procedure themselves.

"The Constitution does not confer a right to abortion," the court said in a 6-3 ruling on one of America's most bitterly divisive issues. "The authority to regulate abortion is returned to the people and their elected representatives."

"The health and life of women in this nation are now at risk," Biden said, warning that other rights such as same-sex marriage and contraception could be threatened next.

The Democratic president urged Congress to restore abortion protections as federal law and said Roe would be "on the ballot" in November's midterm elections.

Criticism of the Supreme Court decision also came from abroad, including from US allies like Britain, whose Prime Minister Boris Johnson called it "a big step backwards."

Canada's leader Justin Trudeau said it was "horrific", and French President Emmanuel Macron voiced his "solidarity with women whose freedoms are today challenged."

Acknowledging the international concerns, US Secretary of State Antony Blinken insisted his department would "remain fully committed to helping provide access to reproductive health services and advancing reproductive rights around the world."

'You have failed us'

Hundreds of people — some weeping for joy and others with grief — gathered outside the fenced-off Supreme Court on Friday as the ruling came down.

"It's hard to imagine living in a country that does not respect women as human beings and their right to control their bodies," said Jennifer Lockwood-Shabat, 49, a mother of two daughters who was choking back tears.

"You have failed us," read a sign held up by one protester. "Shame," said another.

But Gwen Charles, a 21-year-old opponent of abortion, was jubilant.

"This is the day that we have been waiting for," Charles told AFP. "We get to usher in a new culture of life in the United States."

Just hours after the ruling, Missouri banned abortion — making no exception for rape or incest — and so did South Dakota, except where the life of the mother is at risk.

Protesters took to the streets in St. Louis to decry the ban, gathering at what had been Missouri's last abortion clinic.

"It's absolutely disturbing," said Lilian Dodenhoff, 32, standing outside the facility. "So I just immediately reached out to people that I knew shouldn't be alone right now."

Many more are expected to follow suit or severely restrict the procedure.

Protesters also marched in New York, Boston and other US cities as anger grew.

"Abortion is a human right, not just for the rich and white," protesters in New York chanted on Friday.

Democratic Governor Kathy Hochul met the crowd at Union Square, telling reporters abortion rights were "secure" in New York, and that the state would be a "safe harbor" for those unable to receive the procedure in their own states.

"We took action already, we allocated $35 million to support our abortion providers to be able to help our sisters across this nation find their way here," she said. "This is their safe harbor."

There were incidents at some demonstrations on Friday, including one in the Iowa city of Cedar Rapids, where a pickup truck drove through a group of protesters, running over at least one woman's foot, according to local media reports.

In Arizona, CNN reported that authorities used tear gas to disperse protesters on Friday night after they "repeatedly pounded on the glass doors of the State Senate Building," according to Arizona Department of Public Safety spokesperson Bart Graves.

"Abortion presents a profound moral issue on which Americans hold sharply conflicting views," he said. "The Constitution does not prohibit the citizens of each State from regulating or prohibiting abortion."

The court tossed out the legal argument in Roe v. Wade that women had the right to abortion based on the constitutional right to privacy with regard to their own bodies.

While the ruling represents a victory for the religious right, leaders of the Christian conservative movement said it does not go far enough and they will push for a nationwide ban.

"While it's a major step in the right direction, overturning Roe does not end abortion," said the group March for Life.

The decision was made possible by Trump's nomination to the court of three conservative justices — Neil Gorsuch, Brett Kavanaugh and Amy Coney Barrett.

'Will not stop there'

The three liberal justices on the court dissented from the ruling.

"One result of today's decision is certain: the curtailment of women's rights, and of their status as free and equal citizens," they said.

Abortion providers could now face criminal penalties and "some States will not stop there," they warned.

According to the Guttmacher Institute, 13 states have adopted so-called "trigger laws" that will ban abortion virtually immediately.

Ten others have pre-1973 laws that could go into force or legislation that would ban abortion after six weeks, before many women know they are pregnant.

Women in states with strict anti-abortion laws will either have to continue with their pregnancy, undergo a clandestine abortion, obtain abortion pills, or travel to another state where it remains legal.

US braces for more protests after Supreme Court abortion ruling have 1354 words, post on newsinfo.inquirer.net at June 25, 2022. This is cached page on Business News. If you want remove this page, please contact us.