A version of this story first appeared in CNN Business’ Before the Bell newsletter. Not a subscriber? You can sign up right here . You can listen to an audio version of the newsletter by clicking the same link.

London (CNN Business) This week, Russia defaulted on its foreign debt for the first time since the Bolshevik revolution after it failed to pay interest on two bonds during a 30-day grace period that expired Sunday.

But to put the event in context, we don’t need to go as far back as 1918. Instead, we can look to 1998 .
That’s the year Russia defaulted on ruble-denominated bonds, triggering a “Moscow meltdown” that infected markets around the globe.
Quick rewind: In August 1998 , following years of upheaval after the fall of the Soviet Union, the Russian government defaulted on its local debt and devalued the ruble.
The move sparked chaos in Russia, driving up inflation, causing an economic contraction and triggering bank failures. Emerging markets were hammered and American investors panicked, especially when news of the impending collapse of the hedge fund Long-Term Capital Management arrived in September.
Read More
This time has been different. On Monday, global markets barely reacted. Here’s why.
1. We saw it coming. The news that foreign investors hadn’t been paid about $100 million in interest on Russian government bonds wasn’t a shock. In fact, it was widely anticipated after half of Russia’s foreign reserves were frozen and the US Treasury ended a carve-out from sanctions that had allowed US bondholders to be repaid by Moscow.
The European Union also made it harder for Moscow to meet its debt obligations earlier this month by sanctioning Russia’s National Settlement Depository, the country’s agent for its foreign currency bonds.
The market had been bracing itself, with existing bonds collapsing in value to pennies on the dollar. In the eyes of many investors, a default already happened. Credit ratings agency S&P called a “selective default” in April because it offered bondholders payments in rubles, not dollars.
“Russia probably went into default in March and April,” Timothy Ash, an emerging market strategist at BlueBay Asset Management, told me.
2. Investors are more insulated. Foreign investors have dramatically pared back their exposure to Russia since 1998. The process accelerated in the wake of sanctions tied to Russia’s annexation of Crimea.
“The geopolitical risks around Russia have been building since 2014,” Ash said.
Global emerging markets have also grown dramatically over the past two decades, and Russia’s relative weight has shrunk. That reduces fear about contagion from the country’s economic slump, though it’s always a risk.
3. The turmoil is showing up in other ways. Global markets may not be rattled by the default. But they have responded to the war in Ukraine, which has pushed up food and fuel prices and fed decades-high inflation.
That’s forced central banks to more aggressively withdraw support for the economy, generating angst on Wall Street. Traders are now obsessed with how quickly the Federal Reserve and counterparts like the European Central Bank will be forced to hike interest rates.
The tightening of financial conditions from such policies needs to be carefully managed and is the primary reason the S&P 500 fell into a bear market, shedding more than 20% from its recent peak. The CNN Business Fear & Greed Index remains deeply in “fear” territory after producing an “extreme fear” reading one week ago. 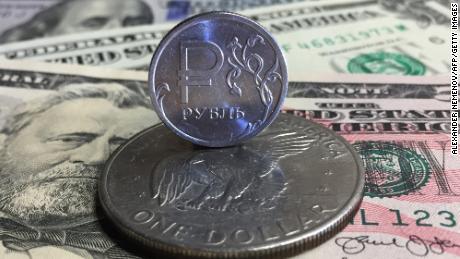 Robinhood shares have gotten pummeled this year. That’s generating chatter that eager buyers could be circling, sensing an opportunity to cut a deal.
The latest: Robinhood’s stock rallied 14% on Monday after Bloomberg reported that the FTX crypto exchange was exploring an acquisition, citing people with knowledge of the matter.
But FTX CEO Sam Bankman-Fried later pushed back on the report.
“There are no active M&A conversations with Robinhood,” Bankman-Fried said in an emailed statement to media outlets . “We are excited about Robinhood’s business prospects and potential ways we could partner with them.”
Robinhood shares are down 4% in premarket trading on Tuesday.
My thought bubble: Perhaps this isn’t the end of the story. Bloomberg reported that FTX is deliberating internally about whether and how to make Robinhood an offer but hasn’t made an official approach.
Bankman-Fried revealed a 7.6% stake in Robinhood last month. He said that it was intended as a passive investment and that he did “not currently have any intention of taking any action toward changing or influencing the control of” Robinhood.
Of course, Tesla ( TSLA ) CEO Elon Musk also had what appeared to be a passive stake in Twitter before he changed his mind and struck a deal to buy the entire company.
What is FTX? The exchange is privately held, insulating it from some of the recent market chaos that’s engulfed the rest of the industry. It raised new funding earlier this year that valued the company at $32 billion. Robinhood is now valued below $8 billion.

Getting cheeseburgers, potato salad and ice cream on the picnic table for Independence Day next week will be much more expensive as the surge in food prices continues to bite.
The average cost of a summer cookout for 10 people is now $69.68, up about 17% or $10 compared to last year, according to a new survey from the American Farm Bureau Federation.
Driving up prices: Ongoing supply chain problems tied to the pandemic, the war in Ukraine and the broader jump in inflation.
The spike in ground beef prices is the biggest contributor. The survey found that two pounds of ground beef now costs $11.12, a 36% leap from last year. Two-and-a-half pounds of homemade potato salad is up 19%, while hamburger buns are 16% pricier.
Strawberries are one of a handful of items to fall in price. The Farm Bureau attributed this trend to “better weather conditions in some fruit-growing regions.”
The takeaway: The high price of gasoline and the run-up in food costs are key ways that Americans are experiencing inflation, battering their confidence in the economy. That’s starting to hurt demand as shoppers pull back, though it still remains strong.
Still, investors, economists and policymakers are worried. As the impact of high prices seeps in, is a bigger drop-off in spending inevitable?

Russia's last default sparked a crisis. This time is different have 1301 words, post on edition.cnn.com at June 28, 2022. This is cached page on Business News. If you want remove this page, please contact us.