Flood-affected people stand on a road damaged by the flood waters after heavy rains in Nagaon district, Assam, on May 19, 2022. (Photo: Anuwar Hazarika/Reuters)

Large swathes of Northeast India, especially Assam and Meghalaya, are experiencing extreme weather this year, as unusually heavy rain in May and June cause heavy flooding and deadly landslides, which experts say can be linked to some extent to climate change.

In Assam, at least 108 people have died so far as flood waters triggered by torrential rain inundated towns, villages, paddy fields, forests and wildlife sanctuaries. Millions have been affected or marooned across the state.

Meghalaya has fared no better, with landslides and flash floods caused by heavy rain blocking roads, washing away bridges and snapping power supply. In Assam, unlike in other years, the floods have wreaked havoc in both urban and rural settlements. Nearly five million people are suffering in 30 of the state's 35 districts, as roads have been washed away, bridges damaged and houses submerged. Barpeta, Dhubri, Darrang, Nagaon, Kamrup and Cachar are among the worst-hit districts.

The Brahmaputra and other major rivers are flowing above or near the danger mark at most places, the Central Water Commission said in a bulletin.

"You cannot imagine our plight. There is water everywhere. Though the waters have reduced a little as the rains have eased, the situation is very critical," says Bipul Kalita, a resident of Rangia in Kamrup Rural district.

Kalita, a local journalist who toured the worst-affected districts in lower Assam, says he has not seen so much rain in many years.

"Embankments of Puthimari, Pagladiya and other rivers in spate have broken at many places, causing extensive flooding. Excess waters released at overflowing dams have worsened the situation," Kalita says.

Surging waters caused by broken dykes or overflowing dams inundated towns such as Mangaldai, Rangia, Kokrajhar, Morigaon and Silchar, where people commuting in boats are a common sight.

Guwahati reported large-scale waterlogging after rain, though much of it was due to faulty urban planning.

Untold misery has been unleashed on villagers as houses have been submerged and crops destroyed, dealing a blow to the rural economy. "They lost their household belongings as well as crops. Making a new start seems impossible at this moment," Kalita said.

A crop area of more than 100,000 hectares in 5,000 villages, and 3.3 million animals, have been affected. At least 284,875 people are sheltered in nearly 1,400 relief camps as hundreds of houses have been partially or fully damaged. Heavy rainfall caused damage in 30 out of 35 districts of Assam. (Photo: AFP)

Nearly 280,000 people have been marooned in Cachar district headquarters Silchar in southern Assam as damage to an embankment of the Barak river flooded the town, with waters touching the first floors at some places.

"It's scary. Silchar is under water. Karimganj has been flooded at places. Waters of the Barak have entered some places of Badarpur also," says Dhruba Saha, a local of the nearby Badarpur town.

Gopa Roy, a resident of Silchar, said she could not reach her house and had to go to her parents' home in Agartala. "Our ground floor is submerged. Our family shifted to the first floor. My shop is under water."

The Barak valley districts of Cachar, Karimganj and Hailankandi have been cut off from the rest of Assam as the highway to Guwahati that passes through Meghalaya has been damaged by landslides and flash floods.

The alternative rail and land route via Dima Hasao, the only hill district in Assam, is also inaccessible. The district was devastated by heavy rain and mudslides that damaged the New Haflong railway station and the scenic, winding rail route that cuts through the beautiful hills, last month.

Land links to Mizoram and Tripura have also been affected as southern Assam acts as a thoroughfare to these two states.

Summer vacations have been advanced in Assam by a week as many schools are being designated as relief camps or damaged in the floods.

The extent of damage has prompted political parties and people alike to declare the floods a national calamity. 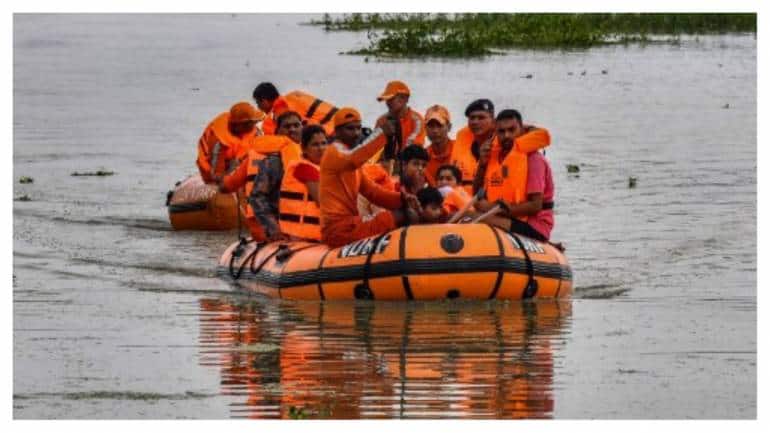 Washed away in Meghalaya

In Meghalaya, heavy rains have affected 633,924 people in 918 villages so far in South Garo Hills, West Khasi Hills and East Jaintia Hills. At least 40 lives have been lost and a dozen missing from April 1 at the last count, reports said.

Visuals and videos of deadly landslides and flash floods are going viral on social media. Scary images of commuters wading through the slush in a tunnel in Meghalaya on National Highway 6 that connects Guwahati and Silchar, or that of a truck going down a caved-in highway, are doing the rounds.

In Siju, a touristy town known for its caves, amenities for visitors have been damaged. A hanging bridge, the longest in the state, was damaged, Meghalaya Chief Minister Conrad K. Sangma said.

The state was also in the news after Mawsynram—the world's wettest place—received 1003.6mm of rain in 24 hours last week, surpassing the previous record of 945.4mm in 1966. Nearby Cherrapunji recorded 972mm in 24 hours. In May and June, Assam and Meghalaya reported surplus rain – unlike last year, when the entire North-East recorded deficient monsoon and pre-monsoon rainfall.

Extremely heavy rain was reported in the third week of June—from June 16 to 22—in Assam, Meghalaya and Arunachal. The three states recorded 170, 203 and 65 percent surplus rain, respectively. Manipur had 20, Mizoram 64, and Tripura 141 percent excess rain. Nagaland had a 20 percent deficit.

In contrast, last year, Assam had a rain deficit of 22 percent, Meghalaya 21 and Arunachal 24 percent. In 2018, Assam recorded a 26 percent rain deficit. In fact, Assam has seen a deficit of over 20 percent six times since 2010.

Sunit Das, scientist at the Regional Meteorological Centre, Guwahati, says the contrasting rainfall over the Northeast can be attributed primarily to the topography of the region, its orientation and its interaction with the monsoon.

"The mountains in Arunachal are east-west oriented. A similar orientation is seen in the Khasi-Jaintia Hills in Meghalaya. But the hills of Nagaland, Manipur and Mizoram extend in the north-south direction," Das said. During the monsoons, whenever moisture-laden southerly or south-westerly winds from the Bay of Bengal hit these hill ranges, Arunachal, Assam and Meghalaya receive more rain, explained Das, a fact seconded by R.K. Jenamani, senior scientist at the IMD in Delhi.

"This time, the presence of the east-west monsoon trough in the lower levels of the atmosphere over the region, and large-scale incursion of moisture due to strong south and southwesterly winds from the Bay of Bengal, led to unusually heavy rains," Das explained. Floods and Assam are synonymous with each other, but the intensity with which the rains have struck early this year has left many baffled.
Assam usually gets the highest rainfall of the monsoon season in July followed by June, August and September, an IMD-Pune report says.

Various reports have already warned of extreme weather changes such as floods and unusually heavy rain in India.

The UN-backed Intergovernmental Panel on Climate Change (IPCC) has warned India of floods and droughts, among other environmental calamities.

A Climate Vulnerability Index of the Council on Energy, Environment and Water names Assam among the states most vulnerable to extreme climate events. The report says the Northeast states are more vulnerable to floods.

According to a study published in peer-reviewed journal Nature last year, Assam will need 943 years of flood protection measures to prevent a crisis like this if its pace of preparedness and climate adaptation doesn't increase, Down To Earth reported. Meghalaya will need 996 years, it said.

"Monsoon systems are always variable, even if there was no climate change. It depends on many factors such as temperature, etc. But climate change has increased the variability factor even more," explained environment expert Chandra Bhushan, CEO, International Forum for Environment, Sustainability and Technology.

This year, the Bay of Bengal has warmed much more, which has led to early cloud formation and early rains in the North-East and Bangladesh, Bhushan explained.

"So this year we can clearly link the rise in temperature in Bay of Bengal with the early onset of rainfall and the extreme downpour."

Bhushan, however, warned that this doesn't mean this will happen again next year. But one thing, he said, will happen for sure: rainfall in short duration and intense form and, in turn, more floods and droughts. 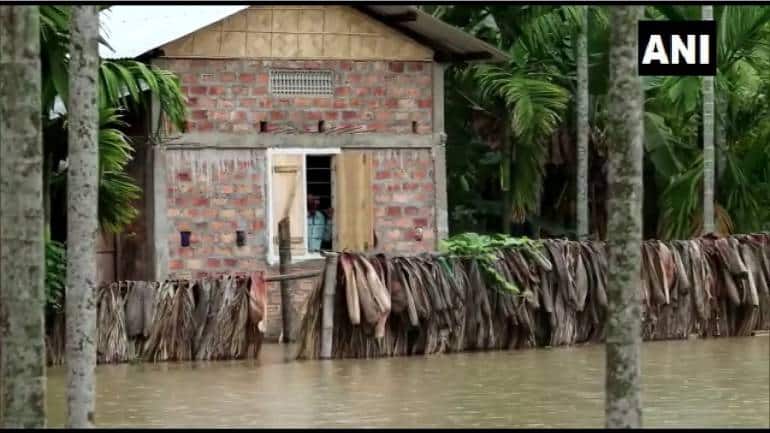 Rivers were flowing above the danger mark in Jorhat district and Nagaon district of Assam in May-June. (Image: Twitter @ANI)

Experts say that uncontrolled human and development activities have affected the ecology and destroyed forests, accelerating the speed of climate change.

"We have to maintain a balance between development and ecology," said M. Firoz Ahmed, a conservationist working with Aaranyak, an Assam-based NGO.

Pointing to the destruction due to flash floods in the Dima Hasao hills district— where a British-era railway line and a new railway station was washed away—Ahmed said, the damage could have been contained had the ecology of the place been taken into consideration while building the station.

"We have to make up for the forest loss. Community participation is a way out to reclaim our forests. The villagers can earn money by selling forest produce and planting the right trees," Ahmed said, warning there are no short-term solutions.

Adaptability is the key as such extreme events are going to be more frequent. "We need to revisit traditional models. Look at how the tribal people living in vulnerable areas build houses on stilts," Ahmed said.

Dyke or bunds are short-term solutions and do not work all the time as they get overwhelmed during such extreme downpour, experts say. Every embankment has a life term, and needs constant maintenance. When they breach, the waters cause much more damage.

"It's better to let the water flow and spread out rather than try to contain it, which is counter-productive," Ahmed said. Trees and greenery, he said, can help slow down the flood waters.

Interestingly, the Assam government's flood control department's portal lists embankments and flood walls, bank protection works, river channelization, flood forecasting and warning among other short-term measures to deal with floods. It says no long-term measures have been implemented so far to mitigate the flood and erosion problems of the state.

Climate change concerns rise as heavy rain batters Assam, Meghalaya have 2124 words, post on www.moneycontrol.com at June 25, 2022. This is cached page on Business News. If you want remove this page, please contact us.