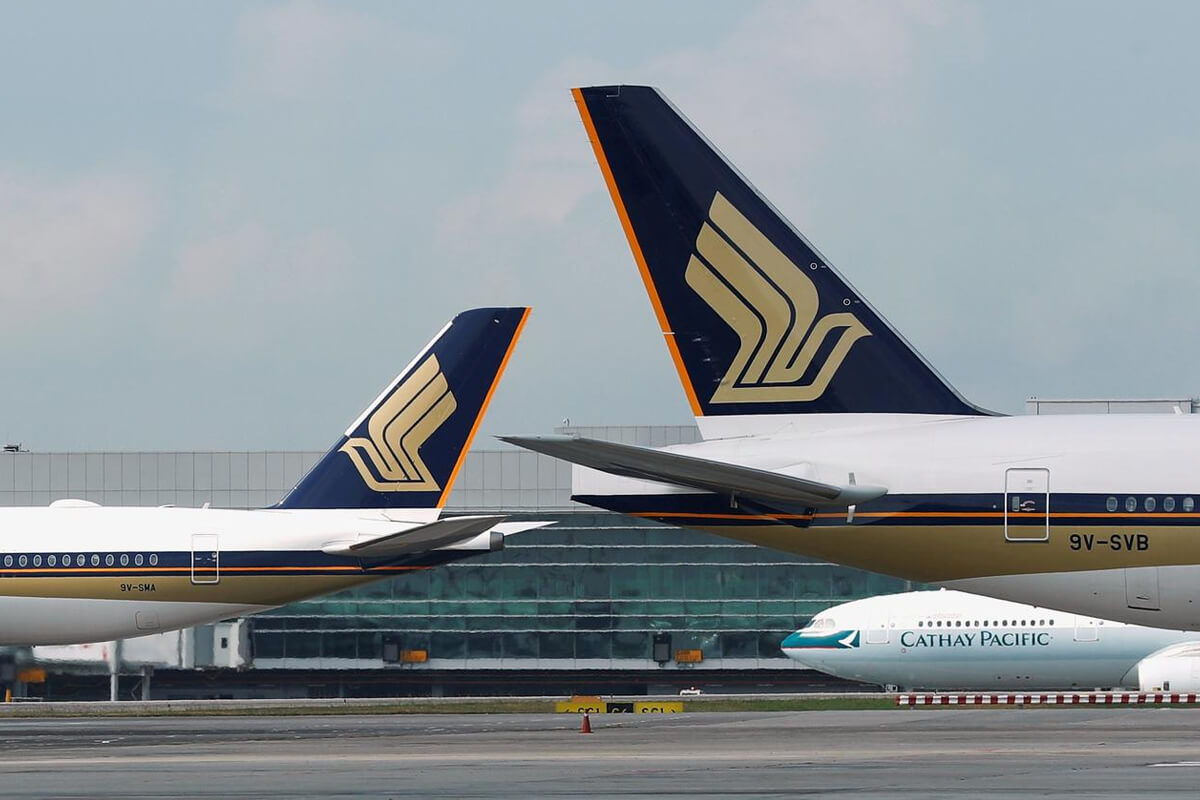 (May 18): A welcome revival in travel and cargo demand helped Singapore Airlines Ltd narrow losses in the second half of the fiscal year through March, though the high price of oil weighed on the carrier, its annual results showed.

The airline's net loss in the October-March period was S$125 million (US$90 million), it said in a statement Wednesday, compared with a loss of S$804 million a year earlier. Sales more than doubled in the six-month period to S$4.79 billion.

Singapore started unraveling tight Covid-19 travel restrictions in September, allowing fully-vaccinated people from certain countries to enter without having to quarantine — a boost to the flag carrier, which had suffered record losses in the height of the pandemic. With Singapore further loosening curbs in April, quarantine-free entry is available for inoculated travelers from anywhere.

"Key markets around the world have further eased travel restrictions, supporting a strong recovery in demand in air travel across all cabin classes," the airline said. "Forward sales, when measured as a percentage of the total number of seats available, in the next three months up to August 2022 are approaching pre-Covid-19 levels."

High fuel costs, the biggest expense for Asian carriers, are hitting the aviation industry just as it emerges from the ruins of the pandemic. With supply squeezed by sanctions on Russia, Brent oil prices climbed to average about US$97 a barrel in January-March.

Singapore Airlines said its fuel costs more than doubled to S$1.38 billion in the six months through March as it operated more flights. It had a fuel hedging loss of S$167 million. The carrier said in November that 30% of its fuel needs in the fiscal second half were hedged at an average Brent price of US$57 a barrel.

The airline carried 2.68 million passengers in the second half, a jump from 710,000 in the previous six months. Yields, a measure of money earned from flying people per kilometer, dropped 22%. The company isn't proposing a final dividend.

"Operations have improved quite substantially," said Mohshin Aziz, director of the Pangolin Aviation Recovery Fund, which invests in aviation-related businesses. "People are going to take a holiday this summer. Things look promising, except for oil prices."

This fiscal year has got off to a healthier start. Singapore Airlines carried 1.45 million passengers in April, the most since the pandemic began, compared with 110,300 a year earlier. It filled 72.7% of its seats last month, an increase from 13.7% in April 2021.

Passenger traffic at Changi Airport reached more than 40% of pre-Covid levels this month, compared with less than 20% in March, the country's Transport Minister S Iswaran said Tuesday. The government aims for the airport to handle at least 50% of pre-pandemic visitor numbers later this year.

Cargo operations also helped Singapore Airlines' earnings as severe bottlenecks in the global supply chain prompted companies to move some goods by air. Airfreight yields in the second half rose 22% in the second half from the previous six months.

The industry still faces challenges. China, the biggest travel market in the world, has kept its borders closed and is maintaining tight virus controls in line with its Covid-Zero policy, an approach abandoned by most other governments. A shortage of manpower globally is also causing delays at airports and flight cancellations.

Singapore Airlines has been hiring cabin crew as it expects to operate 67% of pre-Covid capacity by September and serve over 70% of its destinations. Changi Airport, SATS Ltd and other companies in Singapore's aviation sphere are also looking to add staff to meet demand.

Iswaran said Singapore has restarted work on Changi Airport's fifth terminal, which was halted two years ago due to the pandemic. Construction is expected to start in two to three years for the facility to be ready by the mid-2030s.

Singapore Airlines’ second-half loss narrows as travel picks up have 846 words, post on www.theedgemarkets.com at May 18, 2022. This is cached page on Business News. If you want remove this page, please contact us.