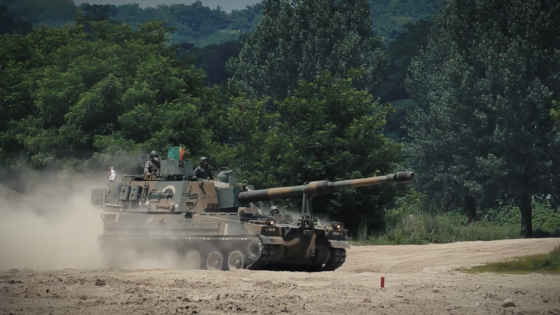 To understand the Korean defense industry, the self-propelled K-9 Thunder howitzer might be a good place to start.

The tank-like vehicle is a key piece of equipment in Korea and a hit with foreign purchasers. It is generally rated as one of the top 5 self-propelled howitzers globally, putting up a good fight against German, Chinese and Russian models. What makes it especially attractive as an export is the price: it costs about a third of the German offering.

About the same bang for fewer bucks.

The 155-millimeter self-propelled howitzer has been a success since its introduction by Samsung Techwin in 1999. Hanwha Defense recently won a 2-trillion-won ($1.5 billion) contract from Egypt in February and a 930-billion-won deal from Australia.

To make one K-9, 700 separate bulletproof steel plates are needed, which require six rounds of wielding. Big surfaces are done by robots, but the small parts must be finished by humans. The wielding process alone takes a month and a half.

The body of the vehicle is inspected to see whether its measurements are spot on. An 18-billion-won Plano Miller, a mechanic miller that cuts and evens out surfaces, then carries out its meticulous finishing. When the powerpack, or a modular powertrain that contains the engine and gear shift, is installed into the vehicle, the K-9 is complete.

With robots and experts dividing the workload, a K-9 is comparable to but cheaper than global competitors. One K-9 costs 4 billion won, while the German Panzerhaubitze 2000 (PzH 2000) self-propelled howitzer, developed by Krauss-Maffei Wegmann and Rheinmetall, is priced at around $10 million.

“It takes about 100 days to assemble the 2,800 or so parts,” said Kim Yong-joon, purchase planning team leader. “It has to be tested within the factory before it can be exported.” 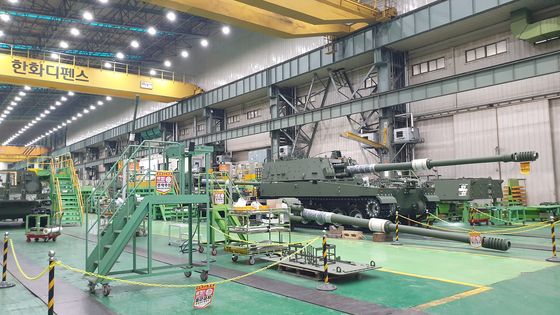 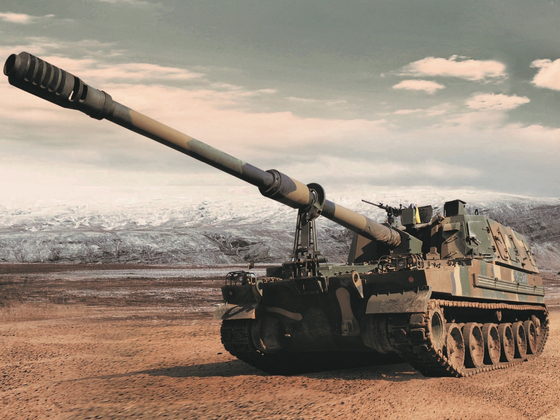 Korea has been a top-10 weapons exporter since 2010 and it’s been climbing up the rankings with increased sales in overseas markets as companies heavily dependent on selling to the Korean armed forces seek diversification of revenue.

According to the Korea Research Institute for Defense Technology Planning and Advancement, Korea is the No. 9 weapons exporter in the world, with a 2.7 percent share in the global market. No. 1 is the United States, with 37 percent, followed by Russia at 20 percent and France at 8.2 percent.

Korean arms manufacturers inked $7 billion dollar worth of contracts last year, a 170 percent jump from the $2.6 billion in 2016 and 135 percent more than last year, according to the Korea Defense Industry Association.

“A contract with the Army meant stable revenue for the local defense companies, but it also meant that the revenue comes to a sudden stop after the contract ends,” said An Yeong-su, head of the Aerospace Strategy and Technology Institute. “That’s why they found a breakthrough in the overseas markets.”

That was the case for Hanwha Defense.

After its K-9 supply contract with the Defense Acquisition Program Administration ended in 2020, the company had no other choice but to focus on exports. Over 5 trillion won of K-9 vehicles have been sold to eight countries including Turkey and Egypt since the early 2000s.

Hanwha Defense is currently bidding for an $18 billion contract to supply armored vehicles to Australia. The K-21, nicknamed the Redback, is an infantry fighting vehicle (IFV) developed to fit the Australian government’s standards.

It is up against Germany’s Rheinmetall. If the contract is won, the Korean company can expect 10 trillion won revenue from the deal. 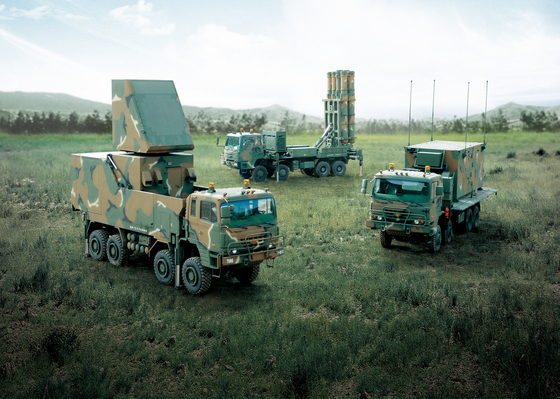 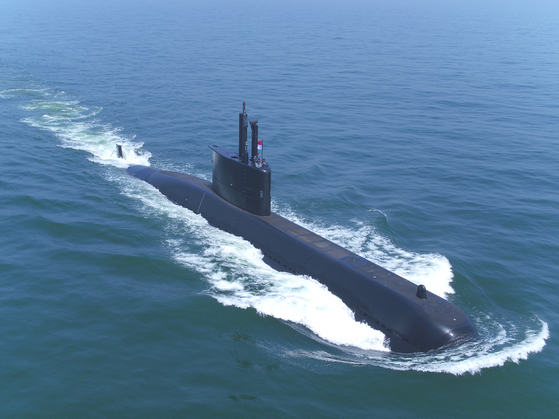 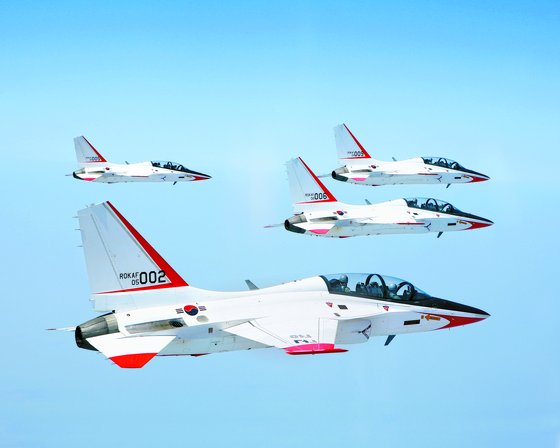 Missiles, advanced trainer jets, 1400-ton submarines and the K-9 are the “the four stars” of defense exports.

The Cheongung II ground-to-air missile with ballistic missile interceptor capability — co-developed by LIG Nex1, Hanwha Systems and Hanwha Defense — was sold in a 4-trillion-won contract to the United Arab Emirates earlier this year.

“We cannot disclose specific countries we’ve sold to, but we are pushing for deals with Southeast Asian, Central and Southern American and African countries this year,” a spokesperson from KAI said.

Daewoo Shipbuilding & Marine Engineering (DSME) is making its mark with submarines. Since 2011, DSME has sold six 1400-ton submarines, worth $3.6 billion, and six battleships to a number of countries, including Indonesia, Britain and Norway.

“The essence of the Korean defense industry is cost-efficiency,” said an industry insider who wished to remain unidentified.

“Production costs have been reduced for each product. The K-9 vehicle has an automated manufacturing system, the Cheongung II is developed and produced differently in the countries it sells to, and the raw materials for the T-50 jets are bought in large quantities and submarine costs are cut through economies of scale.” 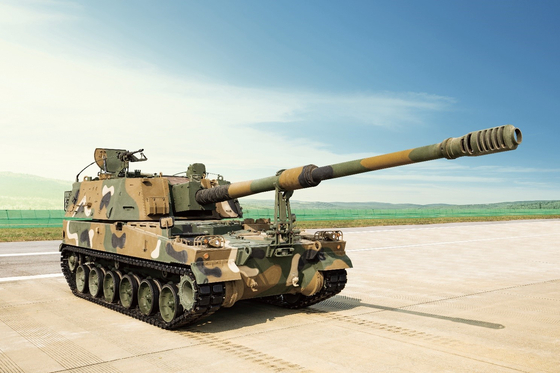 The growth of the defense industry is leading to a healthy cycle for the market, where increased overseas sales result in higher revenue for suppliers.

Hanwha Defense is marketing its self-propelled howitzers in the United States. Hyundai Rotem is eyeing Norway and Poland for its K-2 tanks.

“The Korean defense industry has been achieving rapid growth after producing high-tech weapons good enough for developed countries,” An of the aerospace institute said.

With every 4-billion-won howitzer sale, 2.6 billion won goes to the primary and secondary subcontractors of Hanwha Defense. The vehicle’s powerpack has an engine produced by STX Engine and a gear shift produced by SNT Dynamics and costs 800 million won.

Youngpoong Electronics, a manufacturer with annual sales of 65 billion won, supplies controllers for the K-9 cannons and K-10 ammunition carrier.

“Dozens of years are needed for a company to succeed in the defense industry, but small companies just can’t afford that time,” said Ryu Ha-yeol, CEO of Youngpoong Electronics. “Only through the steady sales of the company that makes the finished products can we get the revenue to research and develop our own.”

Since smaller firms are dependent on the larger companies, the government needs to help the overall market by ensuring a minimum level of revenue for the defense companies through supply contracts, according to Park Hee-seok, CEO of Jisung Quality and Technology.

“When the supply contract ends for the national military, SMEs have to endure a long period of hardship,” Park said. “We ask that the government to support the market by continuing with minimum purchases and letting the companies export freely.”

Korea defense exports: more bang for the buck have 1300 words, post on koreajoongangdaily.joins.com at May 23, 2022. This is cached page on Business News. If you want remove this page, please contact us.