Maya Sree, who goes by only one name, left her hometown in 2018, when she decided to live her life as a transwoman. Her parents did not accept her the way she was, or the jobs that she had taken up earlier to support herself. "But when my parents came to know that I was working for Dhaksha in Anna University campus, I received a call from my family, and they spoke to me, and told me that they were very proud of me. Personally, it's not just a job for me but a new life," Maya Sree, a Directorate General of Civil Aviation (DGCA)-certified drone pilot of the Chennai-based Dhaksha Unmanned Systems (DUMS) told Moneycontrol.

Maya Sree, along with course mates Pragya, Sai and Rahmatullah, are the first from the transgender community in India to be appointed as drone pilots. They underwent intensive training before being absorbed by the company which operates drones with applications in surveillance, agriculture and defence. For them, this job at DUMS gives them a steady source of income and a respectable workplace and is a step towards providing dignity, security and safety to people from the trans community.

Why drones? "From our childhood we all dreamed of flying in the sky whenever we saw an aeroplane. I often wondered, what if I was a bird! So today I am proud to be a transwoman; to tell people that I am working in this reputed Anna University campus, with a dignified ID card; and we are trying to get more and more people like us to join here," Maya Sree, who graduated with distinction, said.

In 2021, DUMS obtained the Remote Pilot Training Organisation (RPTO) licence under the previous Unmanned Aerial System (UAS) Rules regime, and they currently train at the Centre for Aerospace Research (CASR), located at the Madras Institute of Technology, Anna University. The RPTO is officially known as the CASR RPTO. They have already trained 11 batches of pilots, and will soon start the twelfth.

"This was an initiative taken up jointly by us and Indian Oil, who wanted to do something different in their CSR (corporate social responsibility) activities. We have a social service organisation called Bodhi Charitable Trust in Chennai who identified our transgender team members, and it was a good opportunity to take them into our RPTO training. When we trained them, we thought they needed to have access to equal opportunity for getting employment and sustaining their lives. So we thought, why can't we set an example by absorbing them? We have already absorbed four people and we will hire two more," DUMS CEO Ramanathan Narayanan told Moneycontrol.

Pragya, from Virudhunagar district in south Tamil Nadu, was informed of this job possibility by the NGO Bodhi Charitable Trust. "The course went on for 10 days and it was like a regular college course. Our 15-member team had 'normal boy' (Cis men), trans men and trans women. I was worried about all of us learning together, wondering if the boys would be comfortable with us, if the trainer would be comfortable. Because, in Tamil Nadu, there is a fear of the transgender; even when someone approaches us, they have the reaction that 'oh you're a transwoman, what if you don't behave well with me?' I was worried I would be treated the same way here," said Pragya. From left: Pragya (in green jacket) and Sai (in orange overalls) inspecting a drone before taking off

Pragya however was made to feel comfortable during the training and after she completed the course, she went back home before she got a call regarding her joining, leaving her ecstatic.

"There was initial resistance that they may be disobedient, irregular or they may not fit the shoes of training, but honestly I found them to be one of the most disciplined in terms of punctuality and who have been sincerely undergoing training," CEO Narayanan said. They were all trained by Divya C, who the company claims is the first woman in the country to be certified as a drone instructor.

"Society seems to accept me when I am wearing the staff employee card of Dhaksha," Pragya said, pointing at her ID card. "This workplace and the employees are like a family where we carry food for one another. And when we exchange our meals with each other, we feel at home," she said, adding that the job has rekindled her relationship with her family.

Similarly, Rahmatullah, a trans man, has had several jobs before. Originally from Palani in Dindigul district, he completed his education in Salem and became a qualified lab technician. He soon shifted to Chennai with a plan to earn enough money to meet the hefty cost of a sex change operation. However, Rahmatullah, could only find menial jobs such as a helper in a tea stall. "For many days, I did not have food and had to pawn my mother's jewellery just to eat," said Rahmatullah.

So, when Rahmatullah received a call from Bodhi regarding the pilot training, he was sceptical because he thought the money on offer would be too little. "I thought the salary will be only below 10K (Rs 10,000). Because I've faced that in many places I've been… The little money will go to house rent, food… There won't be any left in hand," he said. But Rahmatullah and the others get above Rs 15,000 per month as drone pilots, and DUMS' operations head Wing Commander KR Srikanth (retd) said that the employees will see standard raises and promotions in the future. 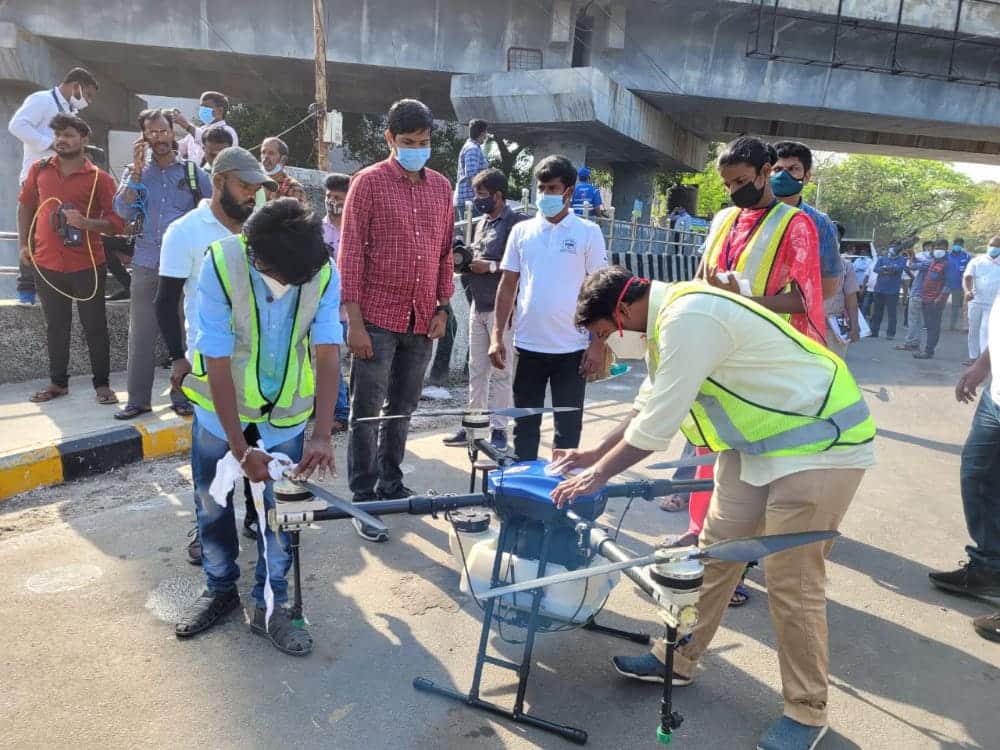 Access to work and education for the transgender community has always been hard come by. A 2018 study by the National Human Rights Commission found that about 92 percent of transgender people are deprived of the right to participate in any form of economic activity in the country, with even qualified ones refused jobs. Around 50-60 percent of transgender persons have never attended schools and have faced discrimination, the study added.

Maya Sree explains that whenever she would go for an interview, she got the sense that the would-be employer was looking for an excuse not to hire her. "They will ask for some qualification, they will find any reason for termination. So most of my friends who were already working in reputed companies, they themselves find it very difficult to handle jobs. They tell us that they were being given extra burden to make them quit."

"So that's why whenever we go to work in a place, we feel separated, or isolated. They look at us differently, like they will pity us, they will show sympathy. But we don't need that. The actual thing we want is changes in society; we deserve better education," she added.

However, of late, governments and corporate bodies have been trying to reach out to the marginalised community. For instance, the Karnataka government has decided to recruit transgender candidates for the post of primary school teachers. The primary and secondary education department which is recruiting 15,000 graduate primary school teachers for classes 6 to 8 has decided to reserve 1 percent of these positions for transgender applicants.

In 2021 September, Tata Steel announced that it was seeking applications from only transgenders for the role of heavy earth moving machinery operators in its West Bokaro division.

For four from trans community, drone pilot jobs give the wind beneath their wings have 1468 words, post on www.moneycontrol.com at May 9, 2022. This is cached page on Business News. If you want remove this page, please contact us.