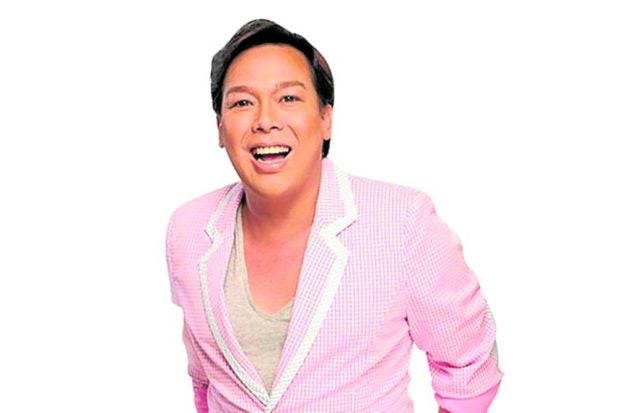 My star as a gay comedian has already faded," declared actor John "Sweet" Lapus, who added that he has learned to embrace being a film and TV director the moment he made this realization about his showbiz career.

"I've learned to accept it. My friends, who are now network bosses and producers, kept urging me to pursue directing film and TV shows. I agree with them because they know what they're talking about—being a gay comedian has a time limit. I can no longer play sidekick to the lead actress because she is most likely way younger than me now," Sweet told reporters during the media gathering for the sitcom "Jose & Maria's Bonggang Villa," which he is directing for GMA 7.

"For the record, I still accept job offers as an actor because my talent fee as one is way higher than what I earn as a director," Sweet pointed out. "I've learned to embrace being a director … the more I do, the more blessings come my way. I've been doing it for three years now. I'm grateful that the producers and cast that I've worked with so far have all been kind, easy to deal with, and really give value to my creativity."

He also observed that appearing on television and on the big screen are no longer just the basis of becoming a celebrity. "There are a lot of gay personalities who are popular on social media. Some have 2 million followers but I don't even know them. Tapos na talaga ako! It's good that my title is 'Universal Sweet.' This means I have other talents. I really studied filmmaking. I'm also one of the writers of [the sitcom] 'Daddy's Gurl' (also on GMA 7)," he said.

As to being the personal choice of lead stars Dingdong Dantes and Marian Rivera, who are also coproducers of the sitcom, to direct the show, Sweet said he feels nothing but gratefulness. "It's such an honor. I'm happy to still be able to work even while we're in a pandemic," he said. "I've worked with Marian for three years in 'Show Me Da Manny' (2009), but with Dingdong, this is a first," Sweet said.

Dingdong, known for appearing in drama and action projects, has admitted to feeling uncomfortable doing comedy. "It's good that his scenes are almost always with Marian. Also, an advantage is that I'm an actor other than being his director so I am able to guide him in all the scenes. He's able to pull it off," Sweet observed. "Another thing is that we have a great team of writers working with us. The story is already making us laugh even during script reading. You can imagine how much of a riot we make when we're already taping the scenes with Marian and the other comedians like Pekto and Benjie [Paras]."

"Jose & Maria's Bonggang Villa," a coproduction of GMA 7, APT Entertainment and Agosto Dos Pictures, premiered on May 14 on the Kapuso channel. It also features Shamaine Buencamino, Pinky Amador, Zonia Mejia and Jamir Zabarte, among others. INQ

Direk John ‘Sweet’ Lapus says goodbye to being a gay comedian have 698 words, post on entertainment.inquirer.net at May 16, 2022. This is cached page on Business News. If you want remove this page, please contact us.