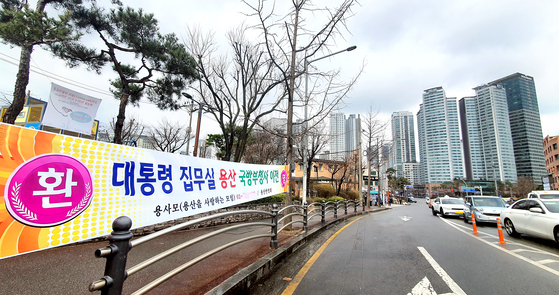 A placard reads “we welcome the relocation of the presidential office to Yongsan Defense Ministry compound,” in Yongsan District, central Seoul, on Sunday. [YONHAP]

The office, which is currently situated in Jongno District, central Seoul, is set to be relocated to the Defense Ministry compound, President-elect Yoon Suk-yeol announced during a press conference Sunday morning.

Yoon will begin work at the new Yongsan office on May 10, when his term begins.

Following the announcement, some local property owners in Yongsan expressed worries while others buzzed with excitement.

Redevelopment is the key issue. Skeptics believe that the relocation wil inevitably slow ongoing redevelopment plans, but those who welcomed the news are expecting improvement in the residential environment.

A number of major redevelopment projects are currently underway near Yongsan’s Defense Ministry compound, with the projects at Hangang-ro 1-ga and near Samgakji Station being the closest.

“Many members of the owners’ union are worried that the projects, which have already been slow in progress, might be dragged out even more due to the restrictions,” said a local realtor when asked about the move of the office.

On Friday, residents living near the Samgakji Station temporarily blocked the road in front of the ministry compound to stop a Yoon transition committee bus, protesting against the relocation.

Yoon emphasized that “no additional regulations would be implemented regarding any construction project near the new presidential office.”

Experts argued that new regulations may be unavoidable.

“Even under the minimum regulations and restrictions, the property rights of residents near the ministry are bound to be limited,” said Park Hap-soo, a professor at Konkuk University Graduate School of Real Estate Studies.

Seo Jin-hyeong, professor of public administration at Kyung-in Women’s University and the president of Korea Real Estate Society, also expressed disappointment saying that “Yongsan should have been developed as a multipurpose district, since it is situated at the center of Seoul and was the last remaining part of the city with high potential for development.”

“If the redevelopment projects are placed under restrictions, the property prices in the entire area of Yongsan District might go down,” said Seo.

Supporters of Yoon’s decisions expect that the relocation will speed up the return of land of nearby U.S. bases, which is scheduled from this year, while boosting the construction projects in nearby areas.

A post on an online real estate website reads that “property prices in Yongsan will soar if the Yongsan Family Park is developed like the Central Park in New York.”

“The plans to move the Gyeongbu and Gyeongwon rail routes underground, which have been long-cherished wishes of the Yongsan residents, may gain traction due to the relocation,” said Doo Sung-kyu, former senior research fellow at Construction & Economy Research Institute of Korea.

Doo also forecast that “the run-down residential areas near the Defense Ministry will be refurbished as well.”

Local residents in Jongno District, where the Blue House is currently located, are also expressing hopes and worries.

Those who support the relocation are seeing it as an opportunity for redevelopment.

“I’ve been living in this neighborhood for 30 years, and everyone including myself was happy to hear the news,” said a 74-year-old resident living near the Blue House, expressing expectations for redevelopment.

“If it is to be relocated anyway, the faster the better I think,” said the resident.

Some residents are opposed to lifting the building height regulation -n the area.

“I’m opposed to deregulation, but since the height cap was placed to preserve cultural properties, I don’t think it would be lifted anyway,” said a 64-year-old realtor at Hyoja-dong, Jongno District, who has been running a real estate agency in the area for over 17 years.

“It makes me uncomfortable to think that this town — which is a cultural property in itself — might turn into an apartment complex,” said the realtor.

Yongsan mixed on hosting presidential office have 841 words, post on koreajoongangdaily.joins.com at March 21, 2022. This is cached page on Business News. If you want remove this page, please contact us.