When it comes to the stock markets, just like cricket, Bollywood, or even politics, everyone has an opinion. But the market opinions that matter the most belong to people actually managing the money. The Moneycontrol Market Sentiment survey aims to gauge the mood of the market and get a sense of its direction by polling money managers.

Investors are unlikely to be perturbed if the government chooses to turn attention towards populist schemes in the upcoming Union Budget for 2022-23, given several state elections in the coming months and a general election in two years, the seventh edition of the Moneycontrol survey of fund managers revealed.

Domestic money managers are of the view that given the high buoyancy in tax collections in the current fiscal year so far, the government could indulge in certain populist measures without sidelining its long-term investment-led policy thrust laid down in the previous Budget.

The government is widely expected to far exceed its tax collections target for the current year. The Union Budget 2021-22 had set a tax collection target of Rs 22.2 lakh crore. As per the latest data, the government mopped up Rs 19 lakh crore in taxes, both direct and indirect, in the first nine months of the fiscal year.

Nine fund managers, managing about Rs 1.1 lakh crore in assets, participated in this edition of the Moneycontrol Market Sentiment Survey.

While the majority of the money managers saw no harm from a populist Budget, others expected the government to remain prudent on the fiscal front and announce balanced measures.

That said, money managers believe that the long absence of meaningful capital expenditure that could thwart economic growth is the biggest worry for equity investors.

The government's infrastructure push in the previous Budget and the improvement in balance sheets of India Inc have led to optimism for a new private investment cycle. However, evidence of general capital expenditure increase from the private sector has been piecemeal with capacity utilisation in the economy still much below the desired level.

Besides a slack in capex cycle, money managers still see a resurgence in the COVID-19 pandemic as the biggest threat to the ongoing rally in the domestic equity market. While the country is undergoing a third wave of infections, the mild nature of it is not expected to hamstring the economic recovery as was the case after the second wave.

Yet, fund managers do not believe that the recent correction in the domestic market is over as was the case in the December Moneycontrol survey. The majority of the asset managers do not expect the US Federal Reserve to budge from raising interest rates this year despite the spread of the Omicron variant, which could continue to pressure risk assets like equities.

In the long-term, though, two-thirds of the fund managers recommend that investors should stay invested as there is more upside in the market. The confidence came from the fact that five out of nine of them expect earnings to grow by 15-20 percent in 2022-23 likely helped by a less-than-severe third wave of the pandemic.

The optimism was also reflected in the fact that nearly two of three fund managers reduced their cash position by 100-400 basis points in December, while all of the participants were largely fully invested in the market.

In terms of sectors that could help the market break out of the correction mode and head upwards, nine out of nine money managers named financials as their preferred pick. Other sectors liked by them included engineering capex-linked, technology, and consumer-facing firms companies.

As much as 33 percent of the participants expect the Nifty50 index to hit the 19,000 points mark by the end of this year suggesting a moderation in optimism as 44 percent had expected the index to hit 20,000 in the previous survey. 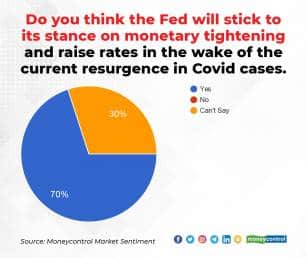 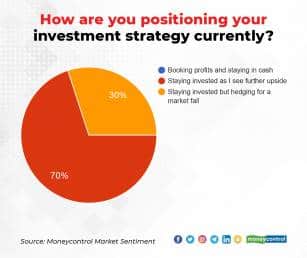 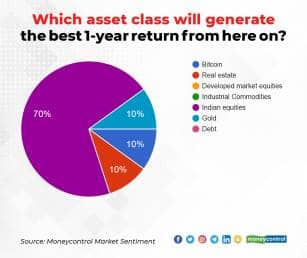 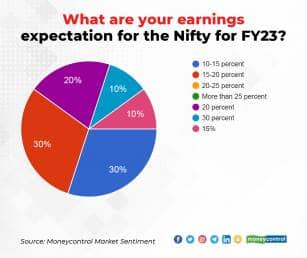 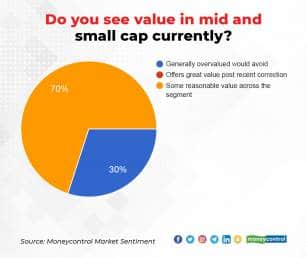 Moneycontrol Market Sentiment Survey | A populist Budget is no threat to equities have 879 words, post on www.moneycontrol.com at January 15, 2022. This is cached page on Business News. If you want remove this page, please contact us.