On Tuesday, Microsoft ( NASDAQ:MSFT ) announced plans to acquire video-game giant Activision Blizzard ( NASDAQ:ATVI ) in an all-cash $75 billion deal, or $68.7 billion when factoring in Activision’s net cash position. That equates to a price of $95 per share, up from around Activision’s $65 share price on Friday — but still below Activision’s 52-week high of $104.53.

The deal would be Microsoft’s biggest deal yet, nearly three times as large as the 2016 acquisition of LinkedIn and nine times the size of the ZeniMax Media acquisition in 2020, which brought over the Bethesda games portfolio.

If the deal passes antitrust regulators, it could be a brilliant move. In fact, the deal smacks of the value investing approach Warren Buffett practices at his conglomerate Berkshire Hathaway ( NYSE:BRK.A ) ( NYSE:BRK.B ) . Given Buffett’s close friendship with former Microsoft Chairman Bill Gates, it’s perhaps no surprise Microsoft is making smart acquisitions at reasonable prices in its mature stage of growth. 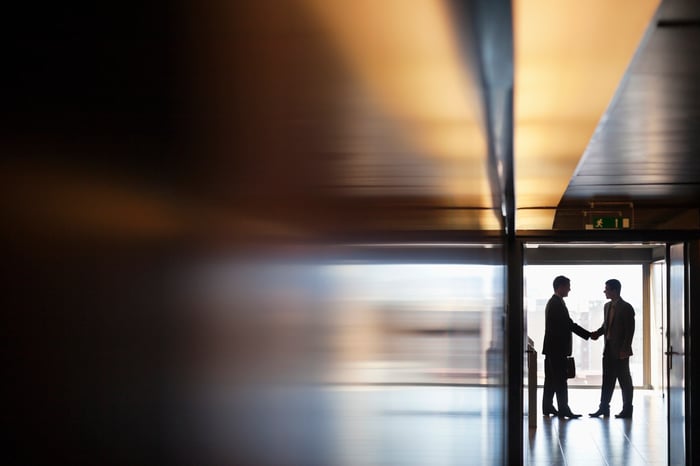 Microsoft is making smart use of its cash. Image source: Getty Images.

Warren Buffett is known for buying wide-moat leaders in their respective industries at bargain prices. Obviously, that’s difficult to do; great companies don’t often trade off to bargain valuations, except during idiosyncratic events. Buffett, however, employs a very simple rule for finding these hidden gems, once saying: “The best thing that happens to us is when a great company gets into temporary trouble. … We want to buy them when they’re on the operating table.”

Activision Blizzard seems to fit that bill. The company has a premier portfolio of video game franchises, including Call of Duty , Candy Crush , Overwatch , and many more. At this high of a market cap, it’s one of the biggest pure-play video game developers in the world, ranking fifth in overall gaming revenue globally.

Yet the company recently found itself “on the operating table,” so to speak. Last summer, California regulators filed a lawsuit against Activision, alleging widespread sexual harassment and gender pay disparities. In November, roughly one-fifth of Activision employees signed a petition calling on longtime CEO Bobby Kotick, who has been at the helm for more than 30 years, to resign. While the company has taken various measures to correct apparent wrongdoings, including firing or disciplining more than 80 employees and changing some internal policies, Activision’s stock hadn’t recovered and was still down more than 35% from its February 2021 highs as of Friday.

While Microsoft is paying a significant premium to last week’s market price, the valuation amounts to roughly 25 times this year’s average earnings estimate of $3.80. When you consider Activision’s net cash position, the valuation falls to around 23. That’s a pretty reasonable price for a “drama-free” Activision, given the strength of its franchises and where it has traded in the past.

Even though Microsoft is getting a reasonable price on a standalone basis with Activision, Activision could be even more lucrative in the hands of Microsoft than it would be as an independent company.

Given the tumult in Activision’s C-suite, The Wall Street Journal reported that Kotick will probably step down once the deal closes. So new management and a culture change at Activision in itself could help attract key talent and revitalize the business after the current employee crisis.

And just as video streaming platforms are spending heavily on proprietary content, video games are moving toward a subscription-based streaming bundle model as well. CEO Satya Nadella has been doubling down on proprietary content for Microsoft’s Game Pass, which Microsoft said in the press release reached more than 25 million subscribers, up from 18 million in early 2021. Activision itself has 400 million monthly active players, so it’s pretty reasonable to think some of those users would migrate over to Game Pass, which Microsoft has been pushing as the ” Netflix of games.”

Finally, in an interview with CNBC early Tuesday, Kotick said that as games migrate more to the metaverse, gaming companies will require technology expertise that Activision might not possess and would probably have a hard time attracting away from big tech companies — especially given recent employee concerns. So it makes sense to sell the company to a large tech giant with diverse technology expertise. Microsoft, of course, has that in spades, with its Azure cloud platform, Xbox game platform, and Hololens AR/VR headset unit.

But are there antitrust concerns?

While the ZeniMax acquisition went through without a problem, Microsoft may be pushing the bounds of its power to acquire companies with this play, given Activision’s sheer size. Activision’s stock only traded up to about $83 as of this writing Tuesday, leaving lots of room below the acquisition price of $95. That seems to indicate some skepticism over the closing of the deal.

Microsoft has been awfully good at dodging antitrust regulators in Washington, who have instead mostly gone after the other FAANG stocks , especially those involved with social media. Yet Microsoft also isn’t done with two other notable acquisitions currently in process in the fields of medical AI and advertising technology. Given the velocity and size of Microsoft’s new deals, it may run into more resistance with this Activision play.

Yet if the deal goes through, I can’t help thinking this is a huge win, and a terrific use of Microsoft’s massive $130 billion pile of cash on its balance sheet. Microsoft has been doing an outstanding job in the cloud and enterprise software markets, and those businesses alone would be enough for management to rest on its laurels. Yet to see management pushing the envelope so hard to grow its consumer-facing search advertising and video game businesses is refreshing to see. The top-notch capital allocation and relentless pursuit of growth is another reason Microsoft deserves its premium valuation.

Microsoft Is Becoming the Berkshire Hathaway of Tech have 997 words, post on www.fool.com at January 19, 2022. This is cached page on Business News. If you want remove this page, please contact us.