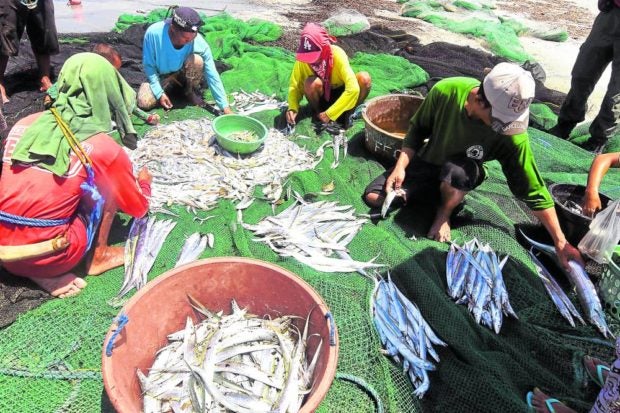 CATCH OF THE DAY Local fishermen at the boundary of Lingayen and Binmaley in Pangasinan use beach seine ("kalokor"), a net thrown by hand in a circular shape. Together with fishermen from nearby Zambales, they tap alternative fishing grounds within the provincial waters as a trip to Panatag (Scarborough) Shoal remains risky due to the presence of Chinese vessels. —WILLIE LOMIBAO

The Department of Agriculture (DA) on Thursday defended its decision to import 60,000 metric tons of fish in the first quarter of this year, insisting that local supply will fall short of demand during the period and this could cause prices to sharply increase.

At an online briefing, Agriculture Secretary William Dar said the country needed more than 800,000 MT of fish to meet the demand for January to March 2022.

Supply, on the other hand, was projected to reach only 681,000 MT, or a gap of 119,000 MT as estimated by the Bureau of Fisheries and Aquatic Resources (BFAR) that needed to be filled either by raising production or imports.

Dar early this week announced that he had authorized the importation of 60,000 MT of fish to cover half of the estimated shortage in local supply in the first quarter.

The importation, according to Dar, was aimed primarily at stabilizing supply and keep prices in the wet markets from rising. The basic economic theory of supply and demand says that if too many buyers are chasing after a limited number of goods, then prices will tend to go up.

The Philippines buys about a fourth of its fish imports from China. Other import sources are Papua New Guinea, Vietnam, Japan, Taiwan, South Korea, Thailand and Nauru.

In its latest tally, the DA said the fisheries sector was the worst affected with P3.97 billion in damage.

"Many fishing communities have been hit. They lost their [fishing] boats, fishing gears and the like. The capacity of our fishers to catch will be in question," he said in a mix of English and Filipino.

Dar also cited the need to lower the country's food inflation, or the contribution of food to the general increase in prices of basic goods and services. Based on data from the Philippine Statistics Authority (PSA), fish inflation climbed to 7.6 percent in 2021 from 6.1 percent a year ago.

Dar said the agency was also expecting global price spikes in petroleum, fish feed and other inputs to affect the local fisheries and aquaculture industry and hamper domestic production and supply.

The impact of the closed fishing season is reflected in the data from the DA showing that prevailing retail prices of local round scad ("galunggong") in Metro Manila averaged P260 a kilo on Thursday from P250 on Wednesday. Imported round scad was slightly cheaper at P240 a kilo.

In January 2021, prices also ranged from P260 to P280 a kilo, which went down to P180 by March, according to the daily market price monitoring conducted by the DA-BFAR in Metro Manila markets.

The decline, according to the DA, was due to the lifting of the closed fishing season that boosted local production.But industry groups still question the importation plan.

"Instead of protecting and helping farmers and fishers recover from the recent typhoon, we have a government agency that sides with importers and big traders. Inuuna ang kita sa panahon ng sakuna (They are prioritizing revenues instead of helping farmers in times of a disaster)," he claimed.House lawmakers on Thursday joined the opposition to the fish import plan.

"How can the Philippines, rich in water resources, fish and aquaculture, now be importing fish? I will not be surprised if the fish we are importing all came from our own Philippine waters. Can you not see the irony?" Deputy Speaker Lito Atienza said.

"Fish caught in our waters are brought to China and then Chinese businessmen offer the same to sell to the Philippines and our government is buying it at a higher cost. It's ironic, but only with corruption can it happen," he added.

In a separate statement, Magsasaka Rep. Argel Cabatbat found irony in the plan to import fish.

"We're a nation surrounded by waters, and yet we need to import fish? Worse than that, we have a shortage? Something's terribly wrong here," he said. Instead of resorting to imports, local fisherfolk demanded that the government assist them in protecting the country's marine resources.

Fisherman Bobby Roldan of Masinloc town in Zambales said if the country was going to import fish from China and Vietnam, there was a high probability that these fish products came from local fishing grounds."

And we all know what happens from there—the influx of [imported] galunggong will drown our very own market. Literal tayong ginigisa sa sarili nating mantika (Filipino idiom similar to "add insult to injury")," Roldan told the Inquirer on Thursday.

Ryan Bonefe, 37, also a fisherman from San Narciso, said China was selling fish they hauled within the country's territorial waters.

Reports from the National Task Force for the West Philippine Sea last year showed that at least 240,000 kilos of fish were being illegally taken by Chinese vessels from the country's waters each day. —With reports from NESTOR CORRALES and JOANNA ROSE AGLIBOT

Let that sink in: Agri chief details reasons to import fish have 1276 words, post on newsinfo.inquirer.net at January 21, 2022. This is cached page on Business News. If you want remove this page, please contact us.