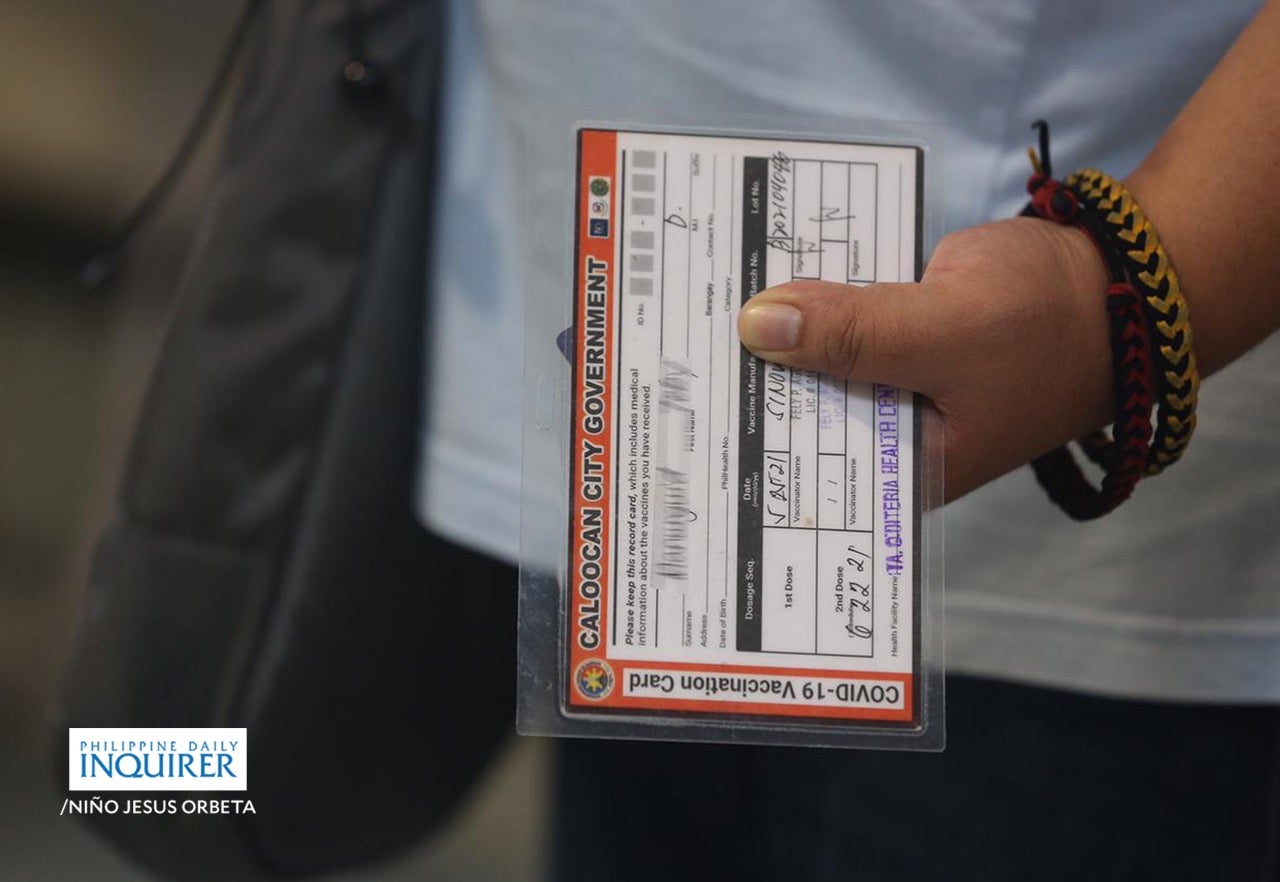 A passenger at MRT-3 shows a vaccine card issued by the local government of Caloocan City. FILE PHOTO

Are you an unvaccinated essential worker worried that you may not get a ride to work because of the "no vax, no ride" policy?

Fear not! The Department of Transportation (DOTr) has a new and convenient solution to your problem—the FAQ (frequently asked questions) Card.

You can whip out your smartphone, go to the DOTr Facebook page (facebook.com/DOTrPH), and show the FAQ card to the transport enforcer that you are among those exempted from the prohibition.

Hopefully the enforcer, or the vehicle driver who will be liable for any violation of the policy, will let you board—as they should, according to DOTr spokesperson Goddes Libiran.

Such workers, the FAQ card said, needed to show proof of employment, such as a company identification card or certificate of employment.

But none of the total 10 cards prepared by the DOTr lists the so-called essential industries allowed to operate under more stringent quarantine regulations by the government's pandemic task force.

By this time all enforcers, including the "mystery passengers" who spy on violators, would have been fully briefed about all the exemptions since the transport department "cascaded" these down to concerned agencies and their staff.

The publication of the FAQ Cards, which are in Filipino, was the latest move taken by the DOTr to explain the reasons behind its "no vaxx, no ride" policy, especially the exemptions, following a wave of criticisms that it is discriminatory and antipoor.

The policy, which the DOTr started implementing in Metro Manila on Monday this week, left some passengers either confused, angry or in tears. But some quarters also cheered the rule.

The questions answered in the cards included whether the policy was legal.

Yes, it is, the DOTr said. It quoted Justice Secretary Menardo Guevarra, who said: "The state has the power to regulate the movement of unvaccinated persons if it deems that such regulation is in the interest of public health or public safety."

Is this policy going to be permanent? The answer is no. But it will remain in place while Metro Manila is under alert level 3, or if it goes up to level 4 or 5.

Aside from the DOTr, Libiran said the Department of Trade and Industry and the Presidential Communications Operations Office were helping inform the public about the policy's "do's and don'ts."

Apart from the social media cards, the DOTr has also been posting on its Facebook page news articles or comments from various government officials and groups showing support for the policy.

A video clip from an unidentified bus passenger was also posted in the social media page, who hailed the DOTr for its policy.

DOTr has tip to convince ‘no vax, no ride’ enforcers have 675 words, post on newsinfo.inquirer.net at January 22, 2022. This is cached page on Business News. If you want remove this page, please contact us.