One of the groups of companies that often report their earnings first each quarter is the banking industry , and Friday brought a couple of key reports that helped investors get some clarity on how the industry is likely to do in 2022. JPMorgan Chase ( NYSE:JPM ) and Wells Fargo ( NYSE:WFC ) both gave their latest financial updates, sending their stocks moving in different directions. Let’s take a closer look at what the two big banks had to say to see what their respective differences are signaling for how the various parts of the financial sector have been performing lately. 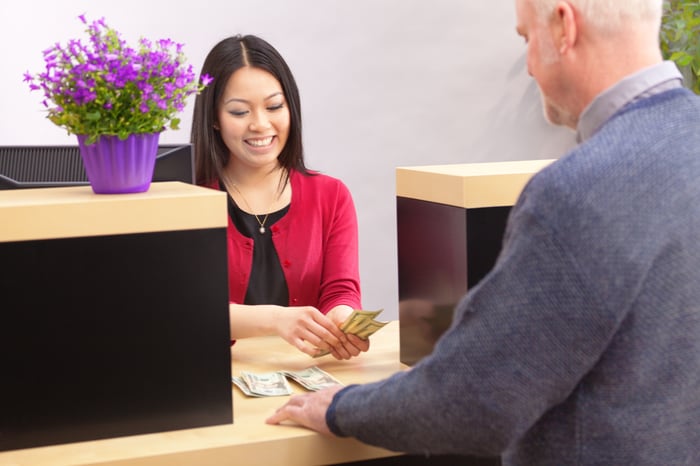 Shares of JPMorgan Chase were down almost 4% on Friday morning. The Wall Street banking giant reported fourth-quarter results that had some strong points, but investors focused on signs of weakness that could spell trouble in 2022.

Many of the numbers that JPMorgan reported showed how much progress the bank has made over the past year. Average loans outstanding across the bank were up 6% year over year, while average deposits jumped 17%. The bank released another $1.8 billion from its net loan loss reserves, and managed revenue soared to $30.3 billion.

However, there were some challenges that JPMorgan faced . The most notable was in its investment banking area, where trading revenue in the total markets segment fell 11% from year-ago levels. Fixed-income trading in particular took a big hit of 16%, but equity markets were also lower. Moreover, on the consumer side of the business, average loans were down 1% year over year, and it took greater loan activity from the wealth management area to offset declines both in consumer and commercial loans.

Strong years on Wall Street have made JPMorgan’s trading operations an essential part of the overall business. If the recent turbulence blossoms into a full-blown correction — or worse — then it could put JPMorgan’s future to the test.

Wells Fargo keeps up its momentum

On the other hand, shares of Wells Fargo were up 1% following its fourth-quarter financial report. The long-beleaguered bank has made a big recovery in 2021, and the latest numbers added to its momentum heading into the new year.

Wells Fargo’s results showed healthy growth. Total revenue rose 13% year over year, but the real boon came from an 11% drop in noninterest expense, showing the value of the bank’s cost-cutting measures. As a result, net income soared more than 90% to $5.75 billion, and adjusted earnings more than doubled to $1.38 per share, due largely to repurchases of $7 billion worth of stock in the fourth quarter alone.

The amazing thing is that Wells Fargo has achieved this improvement while having its asset levels constrained by the Federal Reserve. Average loans were down 3% from year-ago levels, but deposits were up 6.5%, with double-digit percentage growth in the consumer banking segment.

CEO Charlie Scharf made it clear that the work Wells Fargo has to do to regain trust and satisfy regulators is far from over. Investors, though, are ready to move on, and that’s good news for a bank that has badly lagged its peers for years.

Big Bank Earnings Send Wall Street Lower Friday have 766 words, post on www.fool.com at January 14, 2022. This is cached page on Business News. If you want remove this page, please contact us.