Markets remained volatile during the week ended December 3 amid weak global cues and rising concerns over the new Omicron variant, global inflation fears and the Fed hinting towards early tapering. However, the market ended with a percentage gain, supported by domestic cues such as improved GDP and manufacturing PMI data, and the second highest GST collection.

However, in the month of November, the Nifty fell 3.9 percent, while the Sensex was down 3.8 percent.

In the last month, BSE Metal and Bankex indices slipped nearly 9 percent each, while Realty, Auto and Energy indices shed 4-5 percent. On the other hand, BSE Telecom index rose over 6 percent and IT and Power indices jumped 2-3 percent.

Among broader indices – BSE Midcap index fell 2.3 percent, while the Smallcap index ended flat. However, in the last week, Midcap and Smallcap indices  added a percent each. 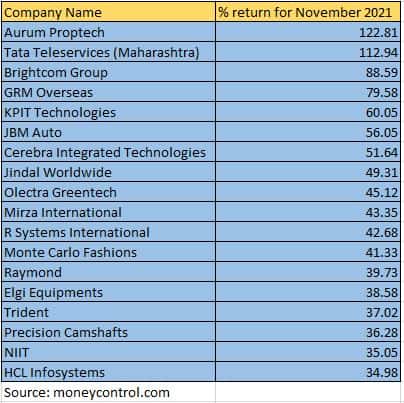 “However, the sentiment reversed towards the end of the week on growing concerns over Omicron as India reported cases. Fed Chair's remarks stating a possibility of a faster end to the bond-buying programme and interest rate hike also kept investors on edge,” Nair said.

“Although we started this week on a negative note and tested 16800, we then saw a relief rally as the market had reached an oversold territory and the primary targets of bearish pattern were met,” said Ruchit Jain, Trading Strategist, 5paisa.com. “The Bank Nifty index took support around its 200-DMA, but did not see much buying interest during the week, and in between, the pullbacks were only short covering moves.”

He said that a sell-off in select heavyweights was seen on Friday when the Nifty approached its 20 DEMA resistance around 17500. “The chart structure indicates that although the Nifty has seen a support base formation around 16800, we are not out of the woods yet and 17500 is now the crucial hurdle that the bulls need to surpass for a broader buying interest,” Jain said.

Where is the Nifty50 headed?

The Nifty failed to hold above the 17400-17500 zone, which is a bearish signal. We are resisting at higher levels and therefore the upside is definitely capped in that region. Unless we do not get past the patch of 17400-17500 on a closing basis, we won’t really see a meaningful upside rally.

If the markets were to break 17100 next week, it would be a matter of concern as there is every possibility we may re-enter the current bear trend.

Good demand zone for Nifty is already formed near 17100-17000 zone and sustenance above these levels will see the index march towards 17500-17600 in the near term. However, if it fails to hold those levels, then further profit booking can push the index much lower. We see immediate hurdles near the 17300-17440 zone.

Market falls nearly 4% in November; 100 smallcap stocks rise between 10-122% have 924 words, post on www.moneycontrol.com at December 4, 2021. This is cached page on Business News. If you want remove this page, please contact us.