WITH the acceleration of the nationwide vaccination programme and reopening of more economic and social sectors, a pick-up in property transactions in the near term looks promising.

And with the Home Ownership Campaign (HOC) also coming to a tentative end on Dec 31, industry observers and property consultants are optimistic that buyers will be scouting for new homes.

Savills Malaysia Sdn Bhd group managing director Datuk Paul Khong says he expects many prospective buyers to capitalise on the discounts and rebates offered under the HOC, before time runs out.

"This year has been a challenging year with more than three months of full lockdown and as we head towards the end of 2021, many buyers may still decide to pick up a new property to enjoy the final discount packages from developers and incentives under the HOC.

"We do not expect a big surge in property purchases for the remainder of 2021 but may see some last-minute buyers who have been waiting out since the start of the year," he tells StarBizWeek. 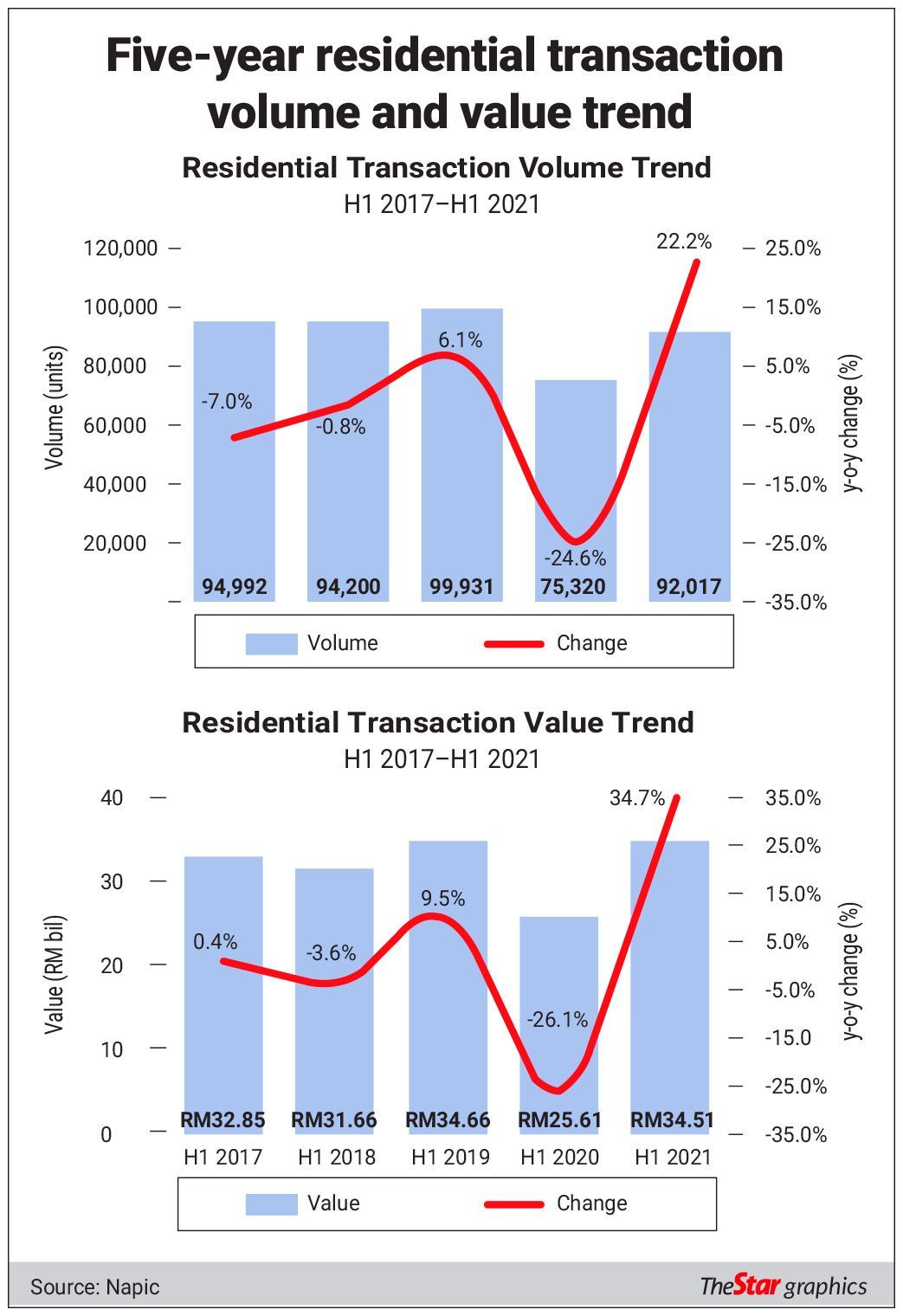 Knight Frank deputy managing director Keith Ooi says while the housing market is on a recovery path, prices, however, are anticipated to remain flat.

"Although there was an improvement in transactional activity in the first quarter of this year, the average house price for Kuala Lumpur, a buyer's market, was lower by 3.1% year-on-year.

"This is likely attributed to weaker demand amid rising inventory as potential buyers and investors adopt the wait-and-see approach during this trying time."

In contrast, he says, average house prices for Penang remained resilient with 0.2% growth, supported by initiatives under the various stimulus packages and the HOC.

"But prices in general are expected to remain flattish."

Going forward, Ooi says the overall value in the residential sub-sector in Malaysia is likely to remain soft throughout 2021.

"Pricing for prime housing, particularly landed properties, are expected to gradually rise throughout 2022, as the property market is widely expected to start recovering on the back of a more positive outlook," he says.

According to Knight Frank's latest Global Buyer Survey, the line between primary and secondary residences has become distorted during the lockdown.

"With children being home educated and parents working remotely, some home owners have spent a longer amount of time at home."

Khong says the ongoing HOC will continue to spur demand for primary homes.

"We see good discounts offered on many new projects and the entry costs are much lower for buyers.

"This is a good time to shop for properties. The secondary market has also taken a hit due to the pandemic. As such, asking prices have become attractive and this segment of the market is expected to stay competitive."

Khong adds that the medium, high-rise segment will continue to perform in 2022, as these are considered safe products catered for the mass market.

"Demand in this segment is expected to stay relatively strong, especially for those projects located in well-established neighbourhoods with good accessibility, especially via public transportation.

"The landed terrace house segment will also be another sector to watch. We expect to see some good launches from the township developers on their landed housing projects into the last quarter."

UOB Kay Hian in a recent report says it expects resilient underlying demand for landed properties from home occupiers and upgraders when the pent-up demand kicks in, as was evidenced in the first quarter of this year.

"We prefer developers that focus on township development, matured areas and landed properties at this point.

"We foresee pent-up demand towards the fourth quarter of 2021, given the projected herd immunity by year-end, low interest-rate environment and the ongoing HOC."

The HOC was initially kicked off in January 2019 to address the overhang problem in the country. The campaign, which was initially intended for six months, was extended for a full year.

It proved successful, having generated sales totalling RM23.2bil in 2019, surpassing the government's initial target of RM17bil.

The government reintroduced the HOC in June last year under the Penjana initiative to boost the property market after it was adversely affected by the Covid-19 pandemic.

The campaign has been extended to the end of this year, with property consultants and developers fully supporting the move.

In March this year, during the Real Estate and Housing Developers' Association's briefing on the property market for 2021, its president Datuk Soam Heng Choon revealed that since the HOC was reintroduced last June, a total of 34,354 residential units valued at RM25.65bil had been sold as at Feb 28, 2021.

"The market's long-term growth prospects could continue to be clouded by structural issues such as unresolved supply glut and deteriorating affordability."

The research house adds that the revised Malaysia My Second Home programme, with stricter terms to foreign buyers, could cast a shadow over the already subdued economy and the housing market over time.

"Yet, we expect marginal impact on the developers in the near term as foreign buyers account for less than 5% of their property sales.

"We understand the new housing minister is re-examining the new criteria imposed and we are hopeful for a positive outcome," UOB Kay Hian says.

Meanwhile, the National Property Information Centre (Napic), says the acceleration of the nationwide vaccination drive and National Recovery Plan threshold across the states will see the reopening of more economic and social sectors in the fourth quarter of 2021.

"Supported by the implementation of various government initiatives and assistance, the property market is expected to be on the recovery path, in line with the gradual economic recovery," it says in a statement.

According to Napic data for the first half of 2021, there were 92,017 transactions worth RM34.51bil recorded during the period.

"Performance across the states improved in the review period. All states recorded higher market volume except for Putrajaya. The four major states, namely Kuala Lumpur, Selangor, Johor and Penang, formed about 50% of the total national residential volume."

Sales performance in the first half of 2021 stood at 24.7%, surpassing the 12.9% recorded in the previous corresponding period.

"The improvement in sales performance can be attributed to the various measures by the government such as incentives under the HOC and low interest rate."

By property type, Napic says terraced houses dominated new launches in the first half of this year.

Pick-up in deals seen in near term have 1473 words, post on www.thestar.com.my at September 18, 2021. This is cached page on Business News. If you want remove this page, please contact us.