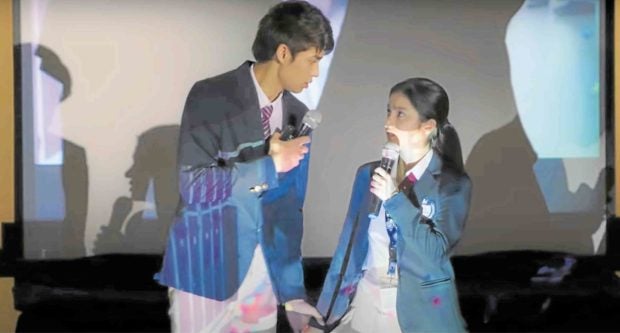 Actor Donny Pangilinan, who topbills the romantic series "He's Into Her," admitted that he and onscreen partner Belle Mariano had to really work on creating that chemistry when they were merely starting the project.

Among other things, Donny attributed this to the fact that he was "naturally introverted." He explained: "I slowly went to the other side of the spectrum these past years. When I was younger, I didn't really talk to people that much if I didn't know them." This was also why, he said, it felt awkward being around Belle at the start. "It took us a couple of shooting days to feel comfortable with each other, for the chemistry to get better. I feel like it was more effective when we started opening up to each other—we grew closer because of that. It also helped when we began embracing our characters. It got easier when we thought of giving our viewers our best."

When it came to the idea that Donny, son of actress Maricel Laxa and motivational speaker Anthony Pangilinan, has finally earned enough acting credits to be cast as a leading man, the 23-year-old said he was very grateful. "I'm just so blessed to be able to showcase myself through the show. I'm also blessed to have had the chance to work with this crew. I'm proud of this group because we gave it our all. Whatever expectations they had of us on the set, we made sure to exceed them 10 times," Donny declared.

"He's Into Her" is based on the popular Precious Pages-LIB novel of the same title by Filipino author Maxinejiji. It is the story of Maxpein (Belle), who agrees to live in Manila, upon the request of her father. She ends up studying at the prestigious Benison International School. As she tries to fit in, she also clashes with Mr. Popular, Deib Lohr (Donny). Her life soon turns upside down when Deib decides to get their entire batch to prank and bully Max. But as he does this, Deib realizes that in crushing Max's spirit, he is also slowly falling for her.

Donny said his main takeaway from the story in terms of love was that, "love can happen unexpectedly, and for the person you least expected."

Donny proudly said that he and Belle were given the chance to get involved in creating their characters. "We had a group get-together before shooting. Personally, I also went through a process while we were taping," the actor said, and then proceeded to recall what happened in an all-important confrontation scene with Belle.

"I didn't talk much with anyone all day. I kept to myself because this was for a big scene where Deib was such a bully," he said. "I really got into the zone before the scene. So I could get the feel, I read a lot of the books. Ms Van (Vanessa Valdez, Star Cinema's creative director) also told me a lot about Deib, the differences and similarities of the one from the book. I fed off from the energy of my coactors as well."

Donny, who aside from being an actor also dabbles in hosting and recording music, said it is all about effective time management and finding the right balance. "It's easy," he told reporters during a virtual media conference. "I just wanted to try a lot of things, especially during this pandemic. I had a lot of time to reflect on what I wanted to do presently, and what I want for the future. I also started a lot of things that I've never tried before, different hobbies. But there were also a lot of times when I simply felt too lazy. I'm honestly not 100 percent all the time. There were also times when I also needed to relax and cool off."

"He's Into Her," directed by Chad Vidanes, began streaming on iWantTFC on May 28. It can also be seen on the Kapamilya Channel, A2Z and on Kapamilya Online Live. INQ

Why Donny had a hard time creating chemistry with costar Belle have 875 words, post on entertainment.inquirer.net at June 14, 2021. This is cached page on Business News. If you want remove this page, please contact us.