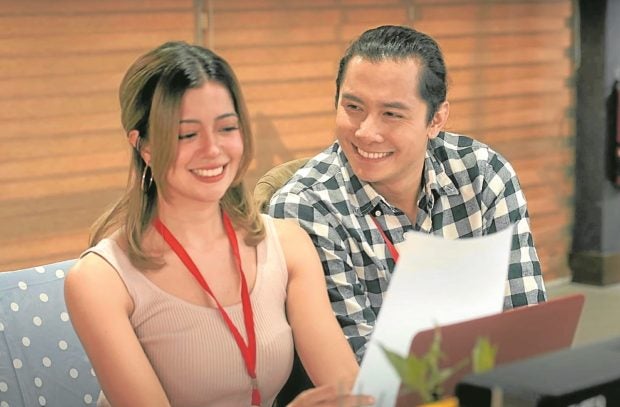 Sue Ramirez (left) as Kim and JC Santos as Bob in "Boyfriend No. 13"

Just like her, I think I was put in this world to love."

"I can't blame her because—I won't deny it—I love the feeling of being in love, too. Ako'y marupok at mapagmahal," she said, laughing, during the recent virtual media conference organized by the streaming app WeTV.

In "Boyfriend No. 13," Ramirez plays Kimverly (Kim, for short), a romance novelist who lives her life "according to the cards, the stars and her superstitions."

Her every move is calculated to avoid misfortune. She would read her horoscope daily, wear her lucky charms to ward off bad luck and consult her fortune teller regularly.

When she meets the tall and charming doctor, Don Lee (JC De Vera), all signs indicate that he is her destiny.

On the other hand, there's the roguish and rugged officemate Bob (JC Santos), who is in need of a writing mentor. The problem is, the next guy will end up being her Boyfriend No. 13!

As to how much she is able to relate to her character, the 26-year-old actress said that just like Kimverly, she would also often consult the zodiac. "I really ask for their birthdays and check whether they are compatible with my sign, Cancer. My boyfriend right now is a Libra, and his is one of the most incompatible signs with mine, but it's really all about how you make it work," she explained.

"I would check the zodiac for guidance, to know how I should be handling problems that might occur because of the differences of our signs. This way, I'm prepared. I know what I will be facing and how I should react when I'm already put in that situation. It helps in a way because I become more patient and understanding. I'd say, 'Oo nga. Gan'on lang talaga siya.' All this because I've read about the personality of Libras."

Santos agrees with her. He admitted to finding it "exciting" to learn all about the personality of one's partner through his or her zodiac sign. "I like that it gives excitement. I guess it's also a Scorpio thing. [The poet] Juan Miguel Severo explains this by saying that the Scorpio is the Naruto (a Japanese manga ninja character) of zodiac, it has a demon hiding within. Yes, I believe in reading the signs. I'm game at anything," he declared.

De Vera, meanwhile, said he first started reading about the zodiac signs only when he met his wife, Rikkah Cruz.

"I checked it out when she said she's an Aquarius and that we both have water signs. I said, 'Wow! We're compatible!' I believe this because I actually ended up with her," said De Vera, who now has a 3-year-old daughter with Rikkah named Lana Athena.

Ramirez explained how her character Kimverly got attracted to the two men in her life: "Don is actually the person that Kim asked from her magic mirror, so she really feels that he is her destiny, the last guy she will ever date. She likes Don not only because he is smart and good-looking, but also because he is a doctor and whenever she would encounter him, palagi siyang nakahubad—Kim likes that very much."

As for Bob, who is Don's exact opposite, she said, "Kim initially hated him. She didn't want to talk to Bob. She didn't even want to see him. But when she got to really know Bob, she saw his sensitive side. She realized that Bob has a good heart and that she did nothing but judge his outer appearance. She likes Don because he's smart but she appreciated Bob for his heart."

When asked to describe the series in one word, this was Santos' reply: "It's justified. Everyone delivered, the ensemble cast, as well as the very talented Sue Ramirez. You will definitely enjoy this. It's fresh, it's sexy. You will finish watching every episode with a smile on your lips."

For De Vera, the perfect word is "funny." He explained: "I've lost count of the number of hilarious lines and humorous scenes. There will be instances when you'll cry along with the characters but most of the time, the series will leave you in stitches. Also, if you're the type who isn't really interested in horoscopes, this series will change your mind."

For Ramirez, the perfect description is "lucky." She explained: "I'm lucky to have had the chance to work with these talented actors. We're lucky because we got included in this project, and because we know that the audience will support it until the end. We're already claiming it!" INQ

Stars of ‘Boyfriend No. 13’ check zodiac signs for matters of the heart have 1272 words, post on entertainment.inquirer.net at June 29, 2021. This is cached page on Business News. If you want remove this page, please contact us.