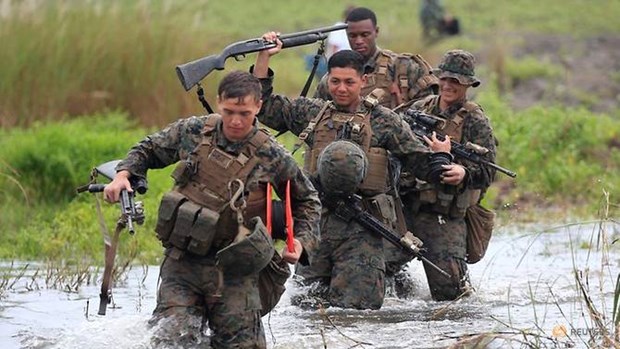 US military forces cross a flooded area near the shore during the annual Philippines-US amphibious landing exercise (PHIBLEX) at San Antonio, Zambales province, in the Philippines on Oct 7, 2016. (Photo: Reuters)

Hanoi (VNA) – The Philippines has for the third time suspended a decision to scrap a two-decade-old Visiting Forces Agreement (VFA) with the US.

Philippine Secretary of Foreign Affairs Teodoro Locsin said on June 14 that the suspension would be for a further six months while President Rodrigo Duterte “studies, and both sides further address his concerns regarding, particular aspects of the agreement."

The President terminated the agreement in February 2020. The termination process, however, was suspended in June last year. The Philippine government again held off the suspension in November 2020.

Signed in 1998, the VFA provides the legal framework for the presence of American troops in the Philippines as they conduct joint military exercises./.

Philippines again suspends scrapping of troop pact with US have 302 words, post on en.vietnamplus.vn at June 14, 2021. This is cached page on Business News. If you want remove this page, please contact us.