Democratic Senator Kyrsten Sinema announced she will vote against a $15 minimum wage if it’s included in the COVID relief plan, effectively killing Democrats hopes of passing the controversial measure with a simple majority vote.

‘What’s important is whether or not it’s directly related to short-term Covid relief. And if it’s not, then I am not going to support it in this legislation,’ Sinema told Politico in an interview. ‘The minimum wage provision is not appropriate for the reconciliation process. It is not a budget item. And it shouldn’t be in there.’

Democrats hoped to pass the measure as part of President Joe Biden ‘s $1.9 trillion COVID relief plan, which would allow them to get it through the Senate via reconciliation – a process that lets them avoid a GOP filibuster.

Republicans oppose the wage hike, claiming it will hurt small businesses and put people out of work. By using reconciliation, Democrats could bypass their objections.

But losing Sinema kills that plan as Democrats need every one of their senators with them in the evenly-divided Senate. Additionally, Democratic Senator Joe Manchin has expressed opposition to the $15 an hour wage.

‘I want to restore the 60-vote threshold for all elements of the Senate’s work,’ the Arizona Democrat explained. 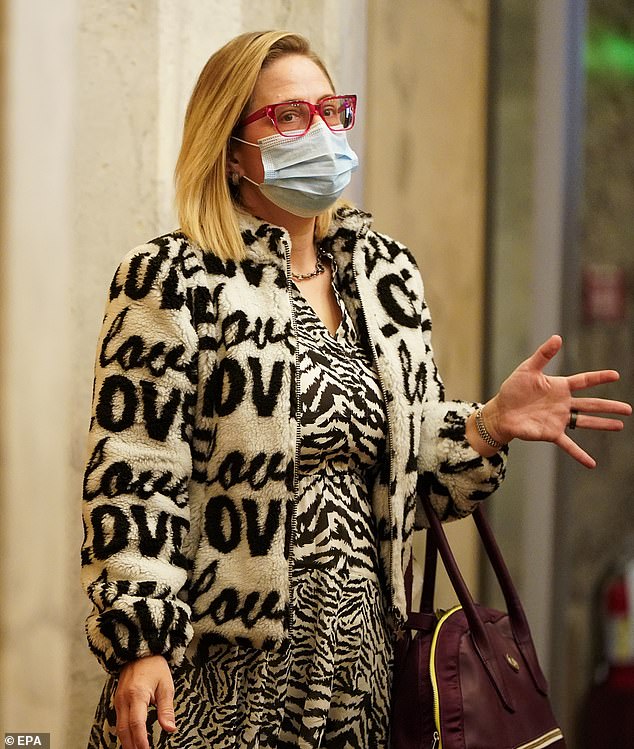 Democratic Senator Kyrsten Sinema announced she will vote against a $15 minimum wage if it’s included in the COVID relief plan, effectively killing Democrats hopes of passing the controversial measure with a simple majority vote 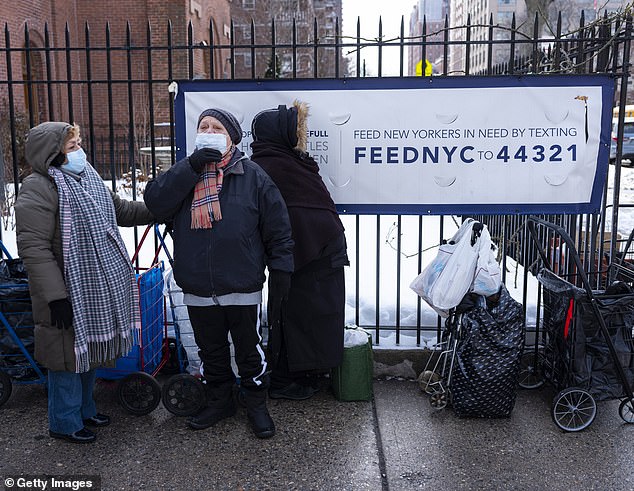 Sinema’s decision will likely anger the progressive wing of the party, who wants the $15 wage to become law by any means necessary; above people wait to receive food donations at the Holy Apostles Soup Kitchen in New York

Sinema’s decision will likely anger the progressive wing of the party, who wants the $15 wage to become law by any means necessary.

The COVID relief legislation is currently being written with each chamber working on its own version. House Democrats have the wage hike in theirs.

‘Yes it will. We´re very proud of that,’ Speaker Nancy Pelosi told reporters Thursday when asked if the overall House bill would include the $15 minimum wage.

The House proposal calls for gradual wage increases that would reach $15 over five years.

But it always faced an uphill battle to include the wage hike in COVID relief plan. Even President Biden, a 40 year veteran of the Senate, said it likely wouldn’t survive.

Senate Majority Leader Chuck Schumer told reporters Tuesday that Democrats were trying to overcome a potential procedural obstacle that could prevent them from including the wage increase in the COVID relief bill.

‘We’re trying to work as well as we can with the parliamentarian to get minimum wage to happen,’ Schumer said.

Under Senate rules, since the COVID relief plan is being passed through budget reconciliation, any provisions in the legislation must impact the budget.

The Senate’s nonpartisan parliamentarian would decide if the wage hike met that thresh hold.

Additionally, a nonpartisan budget agency said last week the $15 wage proposal would cost jobs and raise the costs of good and services but it would also lift nearly one million out of poverty.

The wage hike would would cost 1.4 million jobs by 2025 and increase the deficit by $54 billion over ten years, the Congressional Budget Office said in its findings.

In its cost assessment of Biden’s ‘Raise the Wage Act of 2021,’ the non-partisan agency also said a minimum wage increase would lift 900,000 Americans out of poverty.

The findings will likely inflame the debate around the proposal instead of settle things. Democrats have argued the wage hike will lift people out of poverty. Republicans have countered it would cost jobs.

Both sides will find support for their argument in the CBO assessment. 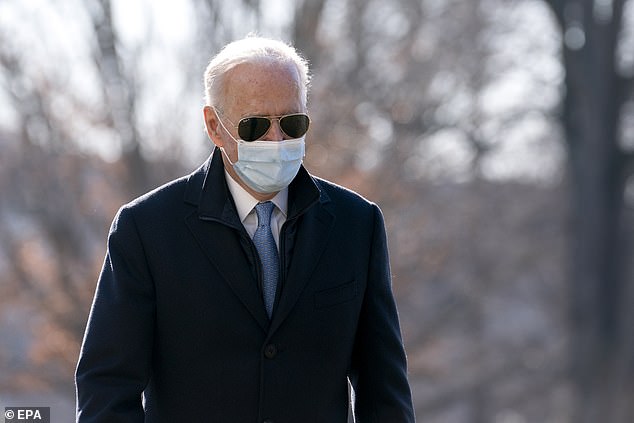 President Joe Biden’s proposal to raise the minimum wage to $15 per hour would cost jobs and raise the costs of good and services but would lift nearly one million out of poverty, the Congressional Budget office found 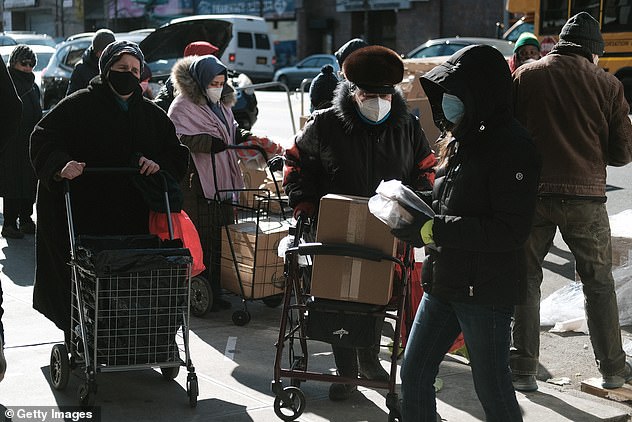 The proposed change in wage could affect as many as 27 million workers who were earning less than or slightly above $15 in 2025, the budget office predicted. The existing federal minimum wage, at $7.25 an hour, has not been changed since 2009.

However, the cost of goods and services would increase because employers would try to pass on the financial burden of higher wages to consumers, the report forecast.

The study also estimates net pay would jump $333 billion over a decade through 2031, with the $509 billion in higher wages, more than offsetting the $175 billion in lost wages due expected job cuts.

White House press secretary Jen Psaki declined to comment on the CBO score and what it mean for Biden’s proposal, which still needs to pass Congress.

‘Well I heard about the CBO score as I was walking out here so I haven’t talked with our economic team about that specifically,’ she said at her press briefing last week.

Senate Democrats found a silver lining in the report. They argued its findings meant a minimum wage hike could be included in Biden’s $1.9 trillion COVID relief plan.

The relief plan will be passed under reconciliation, a fast-track legislative process that takes the vote thresh hold in the Senate down to a simple 51 majority. But, because of that, the bill must have a direct impact on federal spending, revenues or the debt. 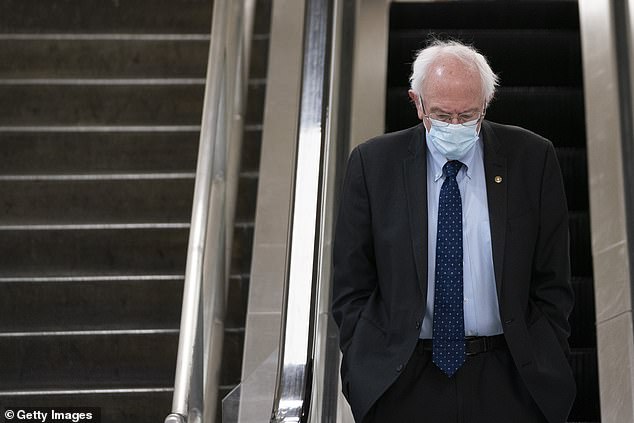 Senator Bernie Sanders, the chairman of the Senate Budget Committee who has been the driving force behind an increased minimum wage, said it can only be raised through the budget process known as reconciilation 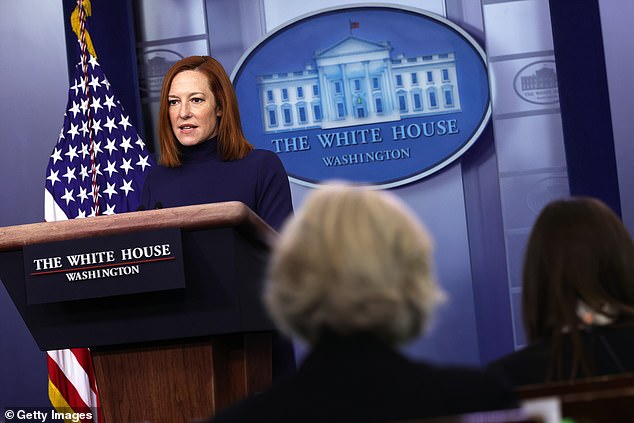 Senator Bernie Sanders, the chairman of the Senate Budget Committee who has been the driving force behind an increased minimum wage, said that CBO score meant there was an impact on federal spending.

‘What that means is that we can clearly raise the minimum wage to $15 an hour under the rules of reconciliation,’ he said.

‘The only way to increase the minimum wage to $15 an hour now is to pass it with 51 votes through budget reconciliation,’ he said.

Biden, who spent three decades in the Senate, seemed uncertain his plan for $15 an hour could be approved through reconciliation.

Democratic senator Kyrsten Sinema says she will vote against $15 minimum wage as part of $1.9 trillion COVID relief bill effectively leaving it dead in the water have 1259 words, post on www.dailymail.co.uk at February 12, 2021. This is cached page on Business Breaking News. If you want remove this page, please contact us.