Among the 5,000 people present at Russian President Vladmir Putin’s inauguration on Monday, one guest literally stood out from the rest — former German Chancellor and Social Democrat (SPD) politician Gerhard Schröder .

Read more : Putin 4.0: What to expect from the Russian president’s next term

He was also the second person to receive a handshake from the newly-inaugurated Russian leader — coming in before Medvedev.

Last year, Schröder became the chairman of Russia’s state oil company Rosneft. He’s also one of the most prominent voices in the West calling for an end to sanctions against Moscow.

US action film star and current Russian citizen Steven Seagal was also in attendance, but was located further back, a few rows away from Russian Foreign Minister Sergey Lavrov, who was placed less prominently in the third or fourth row.

Read more – Putin’s new limousine out of the blue? 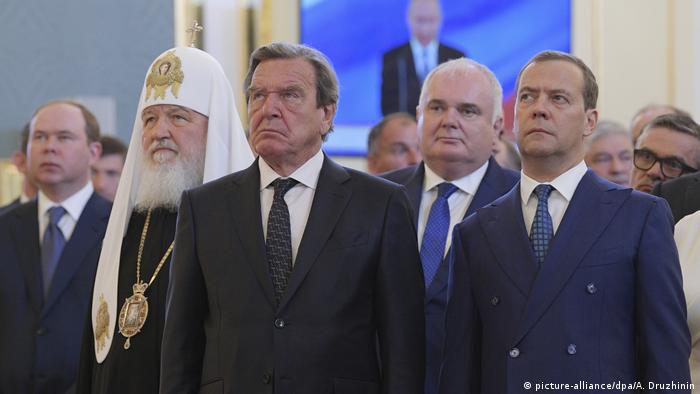 SPD ‘must be ashamed’

Images of Schröder and Putin’s handshake quickly circulated on social media, with many criticizing the former chancellor’s participation in the event.

Vassili Golod, a journalist with German local public broadcaster WDR wrote on Twitter that it makes sense from now on “to label him as a Russian lobbyist” in guest articles and on TV.

Swedish liberal MP Maria Weimer, who was born in Germany, called Schröder’s appearance at the inauguration a “disgrace” writing that “German Social Democrats must be ashamed.”

Neither German Chancellor Angela Merkel ‘s conservatives nor the SPD immediately reacted to Schröder’s appearance in Moscow on Monday.

Green Party co-head Annalena Baerbock strongly criticized the former chancellor, saying that he needs to “clearly and noticeably” address Russia’s democracy deficiencies “instead of sitting in the front row as a claqueur.” A claqueur is someone who is paid for their applause.

Taking a different route, the head of the business-friendly Free Democrats (FDP) Christian Lindner, advocated for a different approach to dealing with Moscow.

“Putin and Trump are realities — and for several more years. It’s time for Germany and Europe to develop new dialogue strategies,” Lindner wrote on Twitter.

Schröder wasn’t the only German to have a prominent place at Putin’s inauguration. Matthias Warnig, a former officer with the East German secret police known as the Stasi, stood right behind the former chancellor.

Warnig is currently the managing director for Nord Stream AG, the company in charge of constructing the so-called Nord Stream 2 pipeline to bring Russian gas directly to Central Europe via Germany. Schröder is also the chairman of the shareholders’ committee for the pipeline.

Despite pushback from Ukrainian officials, Germany gave its final approval for the Nord Stream pipeline expansion earlier this year.

Schröder, who served as Germany’s chancellor from 1998 to 2005, has faced a backlash at home for his close relationship with Putin.

Each evening at 1830 UTC, DW’s editors send out a selection of the day’s hard news and quality feature journalism. You can sign up to receive it directly here.

Putin's inauguration: Ex-German chancellor's front row seat sparks criticism have 1395 words, post on www.dw.com at January 7, 2018. This is cached page on Business News. If you want remove this page, please contact us.